A Portland man plucked a wedding ring off the finger of a dying Army veteran after the good Samaritan was stabbed for trying to stop an anti-Muslim verbal attack on two young women, police said Friday.

George Elwood Tschaggeny, 51, is accused of stealing Ricky Best’s wedding ring and backpack immediately after Best was attacked last week on a light rail train. Authorities said Tschaggeny was wearing Best’s ring when he was arrested on Friday.

“Based on the investigation, detectives believe that Tschaggeny removed Best’s ring from his finger after the attack,” Portland police said in a news release.

Best, 53, was killed along with 23-year-old Taliesin Myrddin Namkai Meche. Police said they rushed to defend two women who were being taunted on the train by Jeremy Joseph Christian, who then allegedly stabbed the men.

Police said Best’s wallet was missing from his backpack. The backpack was recovered after detectives received tips about the suspect’s location near an overpass.

Tschaggeny faces charges of second-degree theft, tampering with physical evidence and second-degree abuse of a corpse. His arraignment is set for Monday. Information about his lawyer wasn’t immediately available.

Correction: The original version of this story misstated the religion of the young women who were verbally attacked on the train. One of the two women is Muslim, while the other is not. 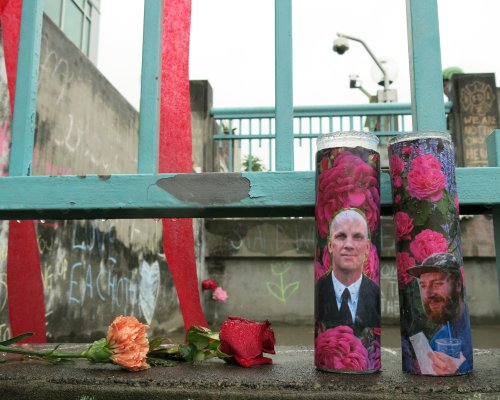 Man Accused of Stealing From Stabbing Victim Captured
Next Up: Editor's Pick