Plenty of ink is being spilled over Russia’s contentious relations with the West these days, and with good reason. But while Russian President Vladimir Putin plays games with the U.S. and Europe — and continues a murky alliance with Syria and Iran — the other countries that will determine Russia’s future shouldn’t be overlooked. Here are five you should be keeping tabs on.

Let’s start with the most obvious. Russia had hoped its eastern pivot towards China would make up for lost Western investment and trade ties in the wake of the Ukraine crisis of 2014. U.S./E.U. sanctions and Russian counter-sanctions are estimated to have cost Russia between 1 and 1.5 percent of its GDP in the first year alone; the IMF forecasts the hit could be as much as 9 percent over the medium term. And while China did indeed step up financing for Russian projects (Chinese investment in Russia grew by 172 percent in the first half of 2016), it wasn’t enough to overcome the losses in growth and financing that Western sanctions knocked off in 2016. Making matters worse, Beijing never endorsed Russia’s annexation of Crimea, as Moscow once hoped it would.

But that’s the thing—while China will sign more deals with Russia, it needs no part in Russia’s geopolitical games. China’s happy to do more business with Russia now that the Russians, with fewer options, have to give China favorable terms and prices. But the global status quo has been good to China, and Beijing wants to see it continue, albeit with some modifications; Russia wants to upend it entirely. In addition, China will continue to compete for influence with Russia, particularly in Central Asia. Don’t expect China to become best friends with Russia anytime soon. Or ever.

Japan has been part of Russia’s Asia outreach for years now—partly to hedge against China, and partly out of hope that Japanese investment in Russia would lead to absorption of Japanese technology, experience and efficiency in Russian industry. While some of that did happen (especially in the energy and automotive sectors), it never hit the levels the Kremlin had hoped.

But when discussing the future of Russia/Japan relations, it’s history and geopolitics that weigh most heavily. Tokyo and Moscow continue to dispute the status of Kuril Islands, a chain of four islands in the Pacific that both countries claim as their own. And to this day, Russia and Japan have failed to sign a peace treaty that would officially end World War II. Then there’s the fact that Japan finds itself in an increasingly challenging geopolitical situation in Asia; China is throwing elbows next door, and North Korea’s kicking up dirt. Russia is not equipped to handle either of those situations; and for all the chaos in U.S. politics at the moment, America’s military prowess still holds sway in the region (as do the 54,000 military personnel stationed in Japan). The U.S. remains the must-have ally in the region if you’re Tokyo. That’s also why Russia would like to edge closer to Japan.

In Syria, Russia has shown it’s ready to rush in where the U.S. still fears to tread. That makes Russia a significant player in the region, more than its economic and military strength would otherwise suggest (Russia is the 12th largest economy, and while it’s 3rd largest in military expenditure, it shells out only about one tenth of what the U.S. does).

While Saudi Arabia and Russia are on opposite sides of the Syrian war, they’ve managed to work together to backstop the fall in oil prices that devastated both countries. There’s also potential here—Saudi Deputy Crown Prince Mohammed bin Salman played a critical role in creating a $10 billion partnership between the Saudi Public Investment Fund and Russia’s Direct Investment Fund, and an improved relationship with Saudi Arabia supports Russian efforts to engage the broader Gulf region. And while the Saudis might be glad to have Donald Trump in the White House at the moment, there are no guarantees for what comes next. Given that, it’s good to have options.

Russia and Turkey are helmed by two of the world’s most colorful strongmen, and both are prime players in the unfolding Syria drama. In November 2015, Turkey downed a Russian fighter jet that was skirting its airspace; Russia retaliated with trade sanctions, but quickly reached a rapprochement when Turkey’s President Recep Tayyip Erdogan apologized. This was followed by the shooting of the Russian ambassador by an off-duty police officer in Ankara about a year later.

In normal times, these things might be cause for war. But as Erdogan chafes under criticism of his government from the West, Russia and Turkey have a greater incentive to work together. Now the countries are pushing to bring the Turkish Stream natural gas pipeline online to shuttle Russian gas to Europe, Turkey is serving as the NATO proxy in the Astana format peace talks on Syria, and Ankara is happy to deflect Western criticism of growing authoritarianism at home by holding up its friendship with Moscow.

Still, Erdogan and Putin don’t quite see eye-to-eye on the role that President Bashar al-Assad should play in Syria’s future — and the question of a Syrian Kurdish territory, anathema to Turkey, will be another source of suspicion.

The last country on this list may also get the least attention. Venezuela is convulsing, and its citizens are taking to the streets daily to protest Nicolas Maduro and the lack of basic food and medicines. Given that Venezuela has the largest proven oil reserves in the world, it’s a spectacular fall for one of Latin America’s former powerhouses.

Here is where it gets interesting. Venezuela’s cash-strapped state oil company, PDVSA, owns the America energy company Citgo. In December, PDVSA received a loan from Russian state-oil company Rosneft, in exchange for which it put up 49.9% of Citgo for collateral.

Should PDVSA be unable to repay its debt — a distinct possibility by the end of 2017 — Rosneft will collect its collateral, and a controlling stake in the company would be easily within its reach. Aside from the strategic play to accumulate quality oil assets on the cheap, Putin just loves the idea of owning one of the largest refiners in the U.S.—and he might just get his wish. 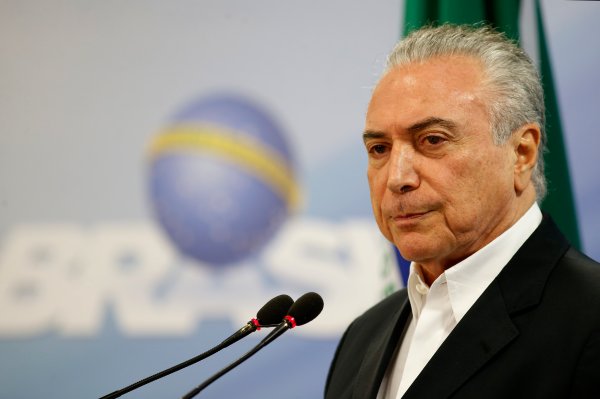 The Silver Lining to Brazil's Never-Ending Corruption Scandal
Next Up: Editor's Pick