The family of Jeremy Joseph Christian, the man accused of killing two people on a commuter train in Portland, Ore. last week, offered their condolences on Thursday to the people affected by the incident.

Christian is suspected of stabbing three men in the neck after they stood up for two black girls who were the target of racially charged and anti-Muslim slurs. Two of the men died and one survived with severe injuries. Christian was arraigned Tuesday on nine charges including aggravated murder, attempted aggravated murder and first-degree assault, according to The Oregonian.

Christian’s family released a statement through their lawyer, The Oregonian reported Thursday, saying they gave their “heartfelt condolences” to the people who died “at the hands of their son.”

“We offer our deepest sympathies to the families of the deceased; to the young women harassed; and to everyone who tried to protect these young women,” the statement said, according to the newspaper. “We cannot begin to understand this senseless act. We abhor violence, racism, and bigotry. We are praying for healing for everyone affected by the horrible actions of our son.”

The attack drew national attention over the weekend, and some saw it as part of the trend of racist incidents increasing since President Donald Trump was elected. In response to the attack, Muslims in Portland have been raising money for the families of the two men who were killed. 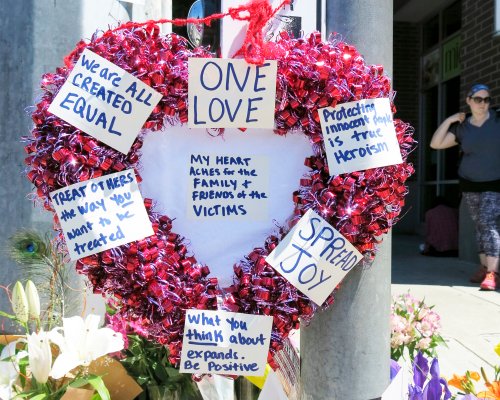