Linda Sarsour, co-organizer of the National Women's March, raises her fist as she walks to the stage to deliver the keynote address at the CUNY School of Public Health commencement ceremony on June 1, 2017 at the Apollo Theatre in Harlem.
Timothy A. Clary—AFP/Getty Images
Ideas
By TIME Staff

Muslim-American activist Linda Sarsour delivered the commencement address at the City University of New York School of Public Health on Thursday, urging graduates not to be bystanders in the face of injustice.

“We in this room together must commit to never being bystanders to poverty, lack of jobs and healthcare, sexism, violence, discrimination, racism, xenophobia, Islamophobia, anti-Semitism, and homophobia,” Sarsour, one of the lead organizers of the Women’s March on Washington, told graduates. “We will stand up, we will speak truth to power no matter the consequences, we will demand change, we will center those most directly impacted because they, we, who are closest to the pain are also closest to the solution.”

Sarsour’s selection as commencement speaker drew criticism from some right-wing speakers who accused her of holding anti-Semitic views because of her statements on Middle Eastern politics, prompting some calls for the speech to be canceled. Sarsour adamantly denied the accusations, and more than 130 Jewish leaders signed an open letter defending her on Thursday.

Read the full transcript of her speech at Harlem’s Apollo Theater: 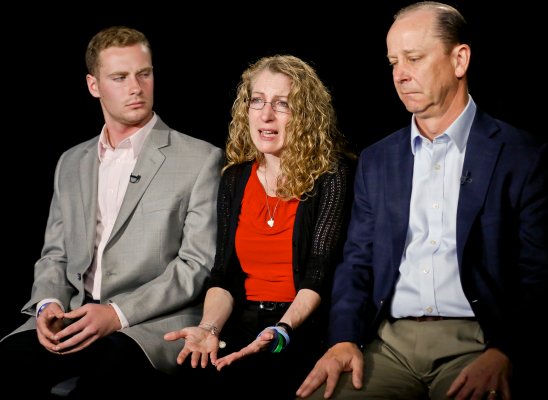 Parents Demand More From Penn State After Son's Hazing Death: 'The World is Watching'
Next Up: Editor's Pick