Breaking: The Men Who Lost a Presidential Election Didn't Take Full Blame, Either

Hillary Clinton has been giving a series of post-election interviews about why she believed she lost the 2016 presidential election and a singular criticism has emerged: Clinton needs to take the blame for her campaign’s failure instead of blaming others.

In December, she blamed Vladimir Putin and former FBI director James Comey for her loss. She echoed those sentiments at an appearance at the Women in the World summit in March and an interview with Christiane Amanpour earlier this month, adding at the latter that she takes “personal responsibility” for the loss because she was the candidate on the ballot. At an appearance at Code Conference on Wednesday, Clinton pointed to a few other sources of blame, including fake news, the Democratic National Convention’s data capabilities and being “the victim of a very broad assumption I was going to win.”

“‘I take responsibility for every decision I made, but that’s not why I lost,” Clinton said.

Her insistence that she was not to blame for her loss has prompted a wave of criticism on social media, arguments about why she should take “her share” of the blame and a blame-y tweet from President Donald Trump.

Others, however, argue that Clinton it’s sexist to blame her.

Clinton addressed the criticism in an interview with New York Magazine, published last week. “I don’t see this being done to other people who run, particularly men. So I’m not going to engage in it,” she said. “I take responsibility, I admit that I’m not a perfect candidate — and don’t know anybody who was — but at the end of the day we did a lot of things right and we weathered enormous headwinds and we were on our way to winning. So that is never going to satisfy my detractors. And you know, that’s their problem.”

Motto decided to take a look at how recent presidential candidates explained their losses. And Clinton isn’t alone in blaming others for her loss — many others also faulted others, in part, for losing the White House.

In a November 2012 conference call with campaign donors, Romney, according to the Los Angeles Times, said that his team ran a “superb” campaign with “no” drama. Instead, he said that he lost because Obama had given “gifts” to black, Hispanic and young voters. “It’s a proven political strategy which is give a bunch of money from the government to a group and, guess what, they’ll vote for you,” Romney said on the call, according to an audio clip of the call published by Fox News.

In an interview with Fox News’ Chris Wallace, Romney echoed those comments, saying: “The president had the power of incumbency, Obamacare was very popular particularly those without health insurance and they came out in large numbers to vote, and that was part of a successful campaign.” But he also admitted that his campaign had made a number of mistakes and that Obama’s campaign had done a “number of things effectively.”

In the same interview, Romney’s wife, Ann, said the media also deserved some blame for his loss. “People didn’t really get to know Mitt for who he was,” she said. “It was not just the campaign’s fault. I believe it was the media’s fault as well, that he was not being given a fair shake. . . . I’m happy to blame the media.”

In an interview with ABC’s “This Week” in December 2008, McCain demurred from discussing why he lost the election and refused to address the notion that he lost because the GOP was perceived as responsible for problems with the economy. “That would sound like I am detracting from President-elect Obama’s campaign,” he said. “I don’t want to do that… Nobody likes a sore loser.”

But McCain also declined to say that he believed that choosing then-Alaska Governor Sarah Palin as his running mate hurt his chances — a common criticism of the McCain campaign. “I’m so proud of her and very grateful that she agreed to run with me. She inspired people. She still does,” McCain said in his first interview after the election with Jay Leno. “I couldn’t be happier with Sarah Palin, and she’s gone back to be a great governor, and I think she will play a big role in the future of this country.”

In a 2005 Newsweek story, Kerry attempted to explain why he lost:

In a 2007 interview with the New York Observer, Kerry echoed the idea that he was proud at how he ran his campaign and said that his campaign’s platform wasn’t the problem. Instead, it was “lying advertisers.” “I learned after the campaign that, in the last week of the campaign, the lying advertisers in Ohio spent $4 million, and we spent 50,000 or something,” he said. “That was the imbalance. I think we laid out, everywhere we went, a vision for America’s role in the world. One of the reasons I feel that is that when I travel abroad, I get an extraordinary welcome from these countries, because they understood.”

In his first post-election television interview with ABC’s Barbara Walters, Gore said that he believed he could have won the White House when the Florida Supreme Court ruled that the state of Florida would have to count all of the ballots. He added that he was “shocked” that the Supreme Court ruled in favor of his opponent. (His then-wife, Tipper, added in the same interview: “I don’t think they ever should have taken the case.”)

In the same interview, he did own up to some of the criticism of his campaign, admitting that he was stiff and awkward. He added that he wished he didn’t show his exasperation with Bush during the debates. But he did say that he didn’t regret relying so closely on his wife and daughter during the campaign, which was another criticism of Gore.

In an interview with Vanity Fair, Gore said that he accepted responsibility for not being able to communicate with voters clearly. But he also criticized the media. “I tried not to let it [affect my behavior],” Gore said. “But if you know that day after day the filter is going to be so distorted, inevitably that has an impact on the kinds of messages that you try and force through the filter. Anything that involves subtlety or involves trusting the reporters in their good sense and sense of fairness in interpretation, you’re just not going to take a risk with something that could be easily distorted and used against you.… You’re reduced to saying, ‘Today, here’s the message: reduce pollution,’ and not necessarily by XYZ out of fear that it will be, well, ‘Today he talked about belching cows!'”

In a 2012 op-ed for the Washington Post, the Republican said that he largely blamed himself for the election loss but noted that the economy heightened his opponent’s chances. “I would lie awake nights wondering what I could have done to change the outcome. Did we rely too much on the Republican base, letting cultural issues define us in a harsh light and driving away independents and suburban voters?” he wrote. “I remembered former president Richard Nixon’s assessment in the months before his death in April 1994: ‘If the economy’s good,” he told me, “you’re not going to beat Clinton.’ The logic was irrefutable: If times are good, why would you vote out an incumbent? But that didn’t keep me from replaying the race in my head.”

The senior Bush has been praised for his gracious letter conceding his election loss to President Bill Clinton. But he’s also pointed some blame for his loss on others. In a 1998 interview with David Frost, according to the Wall Street Journal, Bush said Federal Reserve Chairman Alan Greenspan was responsible, in part, for the loss. “I think that if the interest rates had been lowered more dramatically that I would have been re-elected president because the [economic] recovery that we were in would have been more visible,” Bush said. “I reappointed him, and he disappointed me.”

Those close to Bush have also faulted third-party candidate Ross Perot. In a 2010 op-ed for the Washington Post, Bush’s running mate Dan Quayle wrote: “Speaking on behalf of the Bush-Quayle campaign, to this day we firmly believe that Perot cost the Republican Party the White House.” President George W. Bush said that he believed his father would have won without Perot in a 2014 interview with Face the Nation. 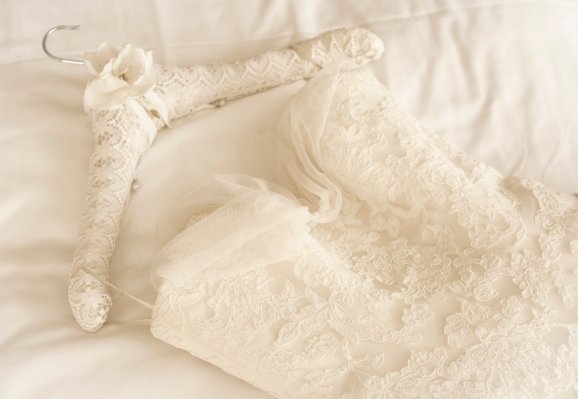 I Hate What My Wedding Did to Me
Next Up: Editor's Pick