Nigel Farage a Person of Interest in FBI Probe into Trump and Russia? 'Fake News,' He Says

Britain’s Nigel Farage, the right-wing former leader of the U.K. Independence Party (UKIP), has rubbished a Guardian report claiming he is a person of interest in an FBI probe into the possible collusion between U.S. President Donald Trump’s election campaign and Russia’s Kremlin.

The Guardian newspaper reported on Thursday that Farage, who was a prominent Brexit campaigner, had “raised the interest” of investigators due to his relations with individuals linked to both the Trump campaign and Wikileaks founder Julian Assange. Citing an anonymous sources “with knowledge of the investigation,” the Guardian reported that Farage is not accused of any wrongdoing and is neither the target or suspect the U.S. investigation.

Farage hit back at the claim on Twitter, branding it “fake news” and a “hysterical attempt to associate me with the Putin regime is a result of the liberal elite being unable to accept Brexit and Trump” he wrote on Thursday. “I consider it extremely doubtful that I could be a person of interest to the FBI as I have no connections to Russia.”

In a statement tweeted by journalist Simon Cullen, Farage says his meeting with Assange in London’s Ecuadorian embassy was “with the view” of organizing an interview for a London radio show he hosts. Wikileaks published hacked emails from Democratic candidate Hillary Clinton’s campaign last year and is suspected of having worked with Russia through middle-men.

Farage was the first British politician to meet Trump following his Nov. 2016 election victory. He told TIME in Dec. that his connections to Trump “were through this team of people, whom I’ve known for some years” he said. The FBI’s press office told the Guardian that it had no comment on Farage. 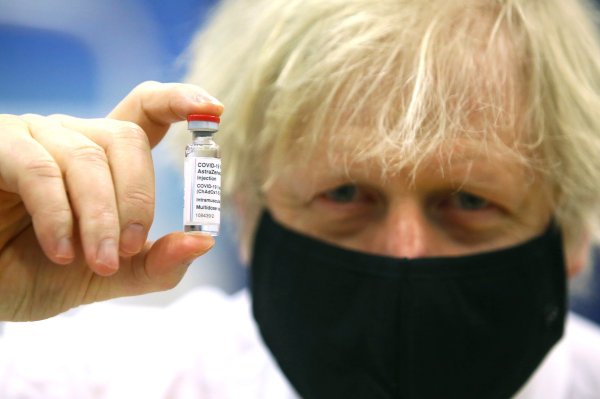 U.K. Speeds Up Vaccination Process
Next Up: Editor's Pick