Major Lazer's Diplo on How to Make a Summer Smash Hit

Major Lazer — the electronic music collective of Diplo, Walshy Fire and Jillionaire — knows how to throw a party. Or at least, they know how to host one, based on the many international music festivals the trio regularly headlines. The group behind recent summer jams “Lean On” and “Cold Water” are back this June with a surprise new six-song EP. The release has all the makings of a warm-weather smash: features from hot-ticket names like Camila Cabello, Quavo and Travis Scott; a song that soundtracks the latest ad for Bacardi, with whom they collaborated on their very own brand of rum; and their signature mix of infectious dancehall, Latin and African influences. Diplo, fresh off rapid-fire DJ nights in Tampa, Boston and Las Vegas, spoke with TIME about the resounding power of Drake and why Major Lazer’s eclectic brand of dance music is making a mark on a global scale now more than ever.

TIME: How is this new EP different from what Major Lazer has put together before? What’s the story of this collection of songs?

DIPLO: A couple of things. We changed the whole art direction up to just have a different vibe. I think it’s six strong songs. We usually put out singles throughout the whole summer, [but this time] we just dropped it all at once. Every song on there represents something different. We have J. Balvin on a Latin record, we have a bunch of African artists on one song, we have a song with Camila [Cabello] and Travis Scott. We have every angle, but we want to promote every one. We just wanted to get them out for people to hear.

How do you approach putting together a track?

We’re very strategic. I’m always working on, like, 50 to 100 songs at any time, my songs, collaborations, demos, whatever. Songs where we’re like, ‘This is perfect for Major Lazer,’ they tend to represent where we’ve been. We went to Africa for most of April and worked on music, traveled and did shows. We’ve worked with Camila Cabello for the last few years to find something perfect for us and for her. J. Balvin just wrote the song in about a half an hour when I texted. When we tour outside the U.S., we’re headlining festivals in Germany and Belgium for hundreds of thousands of people. It’s crazy. And that’s what our market is. That’s the kind of world we live in in Europe, where it’s very much fusion that they listen to. That’s our anchor.

There are also strong dancehall and Caribbean elements to what you’ve been doing from the start. Why do you think dancehall is resonating with audiences so much right now?

I think it’s a global thing, honestly. Drake’s “One Dance” was the first song we ever had that was such a global record. When we travel, we go to Turkey, India. And the style that equalizes everybody is the dancehall beat. It’s the kind of thing that everybody likes, from the streets to the nightclubs. It’s the one thing that’s so global. Everywhere you go, that’s the vibe.

What’s the craziest place you’ve ever performed, and what was that experience like?

Definitely Havana, Cuba last March. Like 400 or 500,000 people came. It was a crazy experience; the energy of those people who had never had a concert before, let alone seen what we do. We were in Kathmandu last month, and Lagos and Nairobi and Uganda and Ethiopia. Every show is a surprise to me, how big it was and how crazy the crowd was. In India the crowds just get bigger and bigger.

How do you as a trio get hyped up to play for these giant audiences?

We drink some rum and play. All of are having the time of our lives right now being able to travel like this. It doesn’t get old.

Do you ever feel pressured to match the success of a record like “Lean On” or “Cold Water”?

We don’t plan it at all. We just want to put out great music. I think when “Lean On” came out it ended up being very influential; every song ended up having that sound, the dancehall beat and vocal sample. We’re just on to the next thing. As a producer and musician I’m fascinated with what’s next, always. That’s what motivates me.

A standout to me is the Caribbean-tinged, drop-heavy “Front of the Line,” featuring Machel Montano and Konshenz. What’s the story there?

We started working on beats last year around November to February. Konshenz is a young songwriter from Jamaica we love. We got him out to L.A. and he sat there for one night, from like 5 p.m. to 5 a.m. before his flight, and just wrote like ten songs and that was one of the demos. We sent it to Machel, and he loved it. We were going to release it around Carnival time in February, but we didn’t think it was good enough. So we worked on it more. Thank God it didn’t go out. Bacardi liked the song and wanted it to be the promotional track for the rum, since it’s the real Caribbean song that we did this year.

Why is this coming out now, and why all at once?

We wanted to get this out because we think it’s a summer record. Hopefully each one of these [tracks] people will get a chance to hear and understand the places we’ve been and what we’ve been working on around the world. 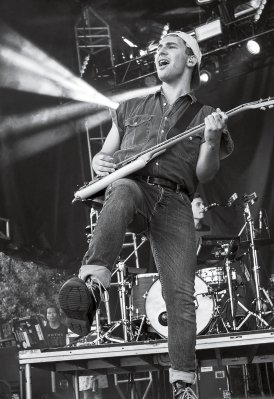 Jack Antonoff Shines a Light In the Dark
Next Up: Editor's Pick