People protest outside the Russian Embassy in London, following reports of the torture and murder of gay men in Chechnya, April 12, 2017.
Thomas Hornall—AP
Ideas
By John Dalhuisen

It is two months since reports surfaced in the independent Russian newspaper Novaya Gazeta that the Chechen authorities have been detaining, torturing and even killing gay men, as part of a deplorable campaign to purge the republic of people of “non-traditional orientation”.

To the rest of the world the news was shocking. To Chechnya’s hounded gay population, recent events are an escalation of the entrenched societal homophobia they have known all their lives. It is the chillingly systematic approach which is new.

“Homophobia used to be separate incidents,” Akhmad*, who is now in hiding, told Amnesty International. “But now there is no salvation – this is persecution at authority level.

It is hard to imagine the loneliness of being gay in Chechnya. It is bad enough that officially, you do not exist at all. Repeated assertions by the authorities that there are no gay people in Chechnya condemn you to a life of invisibility, where your rights can be trampled on with impunity.

Perhaps even worse is that this homophobic rancour is so deeply engrained in society that you have to hide your identity from your family and closest friends. “Honour killings” still take place in Chechnya to atone for perceived stains on a family’s honour, including same-sex sexual relations. One man told Amnesty International that he knew of a gay man who was shot by his relatives and not given a burial. “For a Muslim, having no funeral is particularly hard. It’s as if this person has never existed, that no-one has the right to remember him.”

But gay Chechens do exist. They are real, and they are in desperate need of real help.

It is unlikely to come from anywhere close to home. This persecution is being directed by Ramzan Kadyrov, the most powerful man in Chechnya, who has enjoyed impunity for years of past human rights violations. There are already reports that the Chechen police are planning to litigate against the Novaya Gazeta journalists who first broke the story, for libel. And although Kadyrov says he is ready to cooperate with investigations, he continues to deny the existence of the very people he is persecuting.

While the Chechen authorities continue to live in their own version of reality, gay Chechens have no hope of protection or justice in their home region or country. Amnesty International spoke to witnesses who described how men suspected of being gay are publicly humiliated when the authorities come for them – dragged away in front of their families and colleagues, putting them at risk of reprisals even if they are eventually released.

The toxic mixture of a deeply conservative society and the climate of fear engendered by Kadyrov’s repressive rule means that the authorities can do this in broad daylight with no fear of being held to account.

The torments inflicted on gay men are designed to humiliate as well as physically harm them. Former detainees have described being forced by prison guards to dance the country’s national women’s dance, and to assume female names, to ridicule them for not conforming to homophobic and misogynistic ‘ideals’ of masculinity. Some had electrodes attached to their earlobes, like earrings. Other, more shocking, details which men told Amnesty International cannot be shared for fear of revealing their identities and compromising their safety.

But gay men are not the first group to be persecuted by the Chechen authorities, nor will they be the last. Chechen authorities have long been controlling and targeting various groups they consider a threat to security and “traditional values”. Sexuality and relationships are just one of the areas tightly policed by the Kadyrov government, which is violently intolerant of any kind of criticism. Human rights defenders, media workers and political activists all face threats, harassment and often physical violence.

So do ordinary Chechens who dare to publicly dissent. Amnesty International is aware of cases when individuals who have spoken out have disappeared, then resurfaced a few days later in Youtube videos in which they apologise to Kadyrov and the Chechen people. Men have been forced to appear without trousers in some of these videos – the Chechen authorities have been practicing demeaning their people for a long time.

Meanwhile, international condemnation of the atrocities has not translated into concrete assistance for Chechnya’s at risk and terrified gay men. So far, we only know of a handful of individuals who have been granted asylum in safe countries. According to the Russian LGBT Network, there are about 40 individuals currently in hiding in Russia, desperately trying to flee the country.

Staying in any part of Russia is unsafe. Former detainees remain within easy reach of the Chechen authorities and there is a high risk of honour killings – there are cases where LGBT people have been followed to other regions and attacked by their relatives.

So it is imperative that international governments open their doors to gay men fleeing Chechnya. It is vital that the governments who have rightly spoken out in condemnation of these atrocities follow up by ensuring those Chechens who are seeking international protection are granted access to fair asylum procedures.

Of course, the onus is primarily on the Chechen and Russian authorities to stop these atrocities. They need to start by releasing all those they have detained simply for being who they are. International pressure has to be maintained until the Chechen and Russian authorities acknowledge this purge and other crimes against the population and take meaningful steps to bring those who are found responsible to justice.

But for men trapped in Chechnya, threatened on all sides, justice looks like a pipe dream and the most pressing task for them is simply to get out. The international community must play its part in assuring their safety. It is not enough to pay lip service to LGBT rights while people are living in the shadow of torture and death. 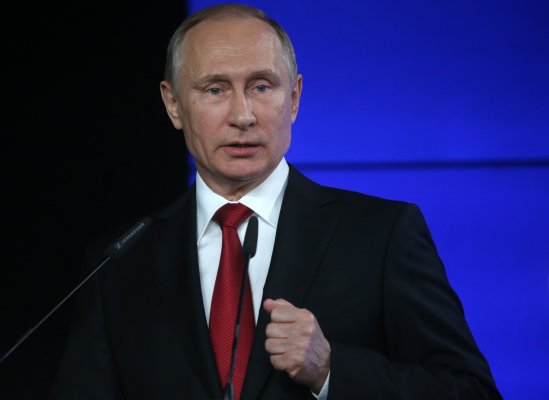 Vladimir Putin to Megyn Kelly: U.S. Hackers Could Have Framed Russia
Next Up: Editor's Pick