A Bangladeshi villager evacuates to a cyclone shelter on the coast in Cox's Bazar district on May 30, 2017.
AFP/Getty Images
By Feliz Solomon

The powerful Cyclone Mora swept the coast of Bangladesh Tuesday morning, pummeling low-lying villages and tearing the roofs off of huts where hundreds of thousands Rohingya refugees have sought shelter after fleeing persecution in Myanmar. The U.N. estimates that about 2.8 million people are affected by the storm, and warns that damage to refugee settlements could be “severe.”

Mora made landfall around 6 a.m. on a stretch of coast between Chittagong and Cox’s Bazar, bringing heavy rains and winds up to 73 m.p.h., according to the Bangladesh Meteorological Department. At least six people have died, the BBC reports, mostly from being struck by fallen trees.

Humanitarian response teams are still assessing the damage and a clearer picture should emerge within the next 24 hours. A spokesperson for the International Federation of the Red Cross and Red Crescent Societies, Nazmul Azam Khan, tells TIME that more than 450,000 Bangladeshi villagers have been evacuated and at least 10,000 homes destroyed, though the extent of the damage is still unknown. “We sent a damage and need assessment team in the morning,” Khan tells TIME. “We’ll have a clearer picture tomorrow.”

It is unknown how many of the area’s estimated 300,000 refugees were moved to safety. Mozharul Huq, a spokesperson for the Bangladesh Red Crescent Society based in the capital Dhaka, tells TIME that refugees were not among the evacuees because the locations where the encampments lie were “not affected,” though some accounts suggest otherwise.

A U.N. official who works in one of the camps told Reuters on condition of anonymity that humanitarian actors are “worried” due to the storm’s strong winds and the “flimsy structures” that refugees are living in. The official said that heavily pregnant women had been evacuated but most were stranded in one of two encampments as the storm approached.

Shamsul Alam, a Rohingya community leader, told Reuters that almost all of the 10,000 thatch-roof huts in the Balukhali and Kutupalong camps “have been flattened.” Another camp community leader, Omar Farukh, told the agency that “now we’re in the open air.”

The Rohingya are a stateless Muslim minority residing mostly in Myanmar’s western Rakhine state. The group has been stripped of their citizenship and subjected to years of harassment in the Buddhist-majority country. They face severe restrictions on freedom of movement and basic services, a situation that has only worsened in the wake of deadly riots that erupted in mid-2012.

Hundreds of thousands of Rohingya have resided in isolated displacement camps in Bangladesh for decades, having fled several waves of violence in Myanmar. More than 70,000 have crossed the border since October of last year, when the military launched a violent campaign across the north of Rakhine state in response to an attack by an alleged armed insurgent group.

Some storm damage has also been reported in Rakhine state, where more than 100,000 Rohingya are confined to squalid displacement camps, as well as in Chin state, an impoverished region that is among the hardest places in the country for aid workers to access due to its remote and mountainous terrain.

The densely populated and low-lying coast of Bangladesh is highly vulnerable to cyclonic storms. According to CNN, seven of the 10 most deadly storms in recorded history made landfall in either Bangladesh or Myanmar. 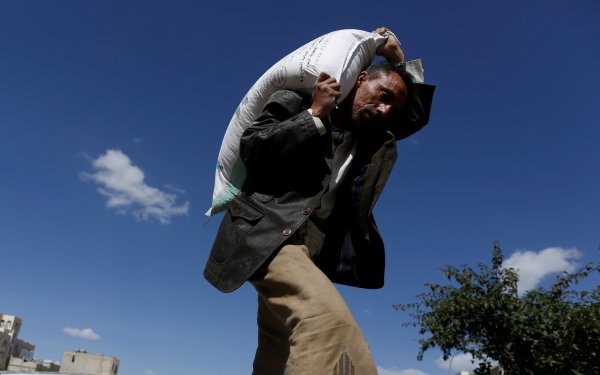 Yemen Faces 'Total Collapse' On Our Watch, the U.N. Warns
Next Up: Editor's Pick