A man carries a sack of wheat flour he received from a local charity during the holy month of Ramadan in Sanaa, Yemen May 29, 2017.
Khaled Abdullah—Reuters
By Ryan Kilpatrick

Undersecretary-General for Humanitarian Affairs Stephen O’Brien warned the U.N. Security Council that “urgent action is needed” to bring the Arab country back from the brink of famine and disease, the BBC reports.

Seven million Yemenis are currently at risk of famine, with another ten million facing dire food shortages. An outbreak of cholera has killed 500 people since late April, and the U.N. expects 150,000 more cases of the disease in the next six months.

O’Brien said that only 24% of the $2.1 billion needed for humanitarian aid in the country had so far been pledged, and he urged the international community to take immediate action to avert catastrophe.

“Crisis not coming, it is not looming,” he said. “It is here today — on our watch and ordinary people are paying the price.”

Yemen has been mired in conflict for the past two years with as many as 8,000 people, mostly civilians, killed in clashes between Houthi rebels and pro-government forces backed by neighboring Saudi Arabia.

The escalating conflict has also allowed al-Qaeda to reestablish itself in Yemen, taking over swaths of territory in the south and southeast of the country.

The U.N. estimates that 18.8 million people — almost two thirds of the population — are in need of humanitarian assistance in Yemen, which was already the poorest country in the Arabian Peninsula before its enduring political crisis. 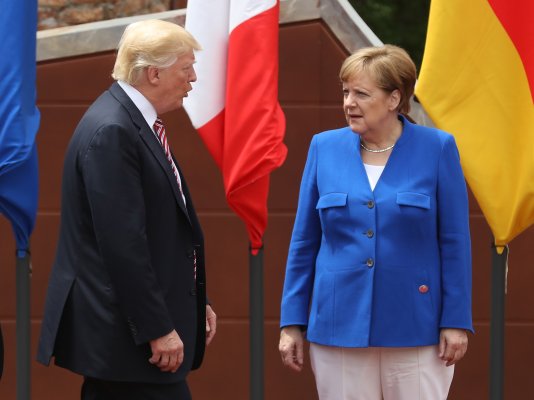 Angela Merkel and Donald Trump Intensify War of Words
Next Up: Editor's Pick