A Peek Inside the Transparent Frog

By Jeffrey Kluger
Have a look: The transparent Hyalinobatrachium yaku frog
(Collected by JC and Carlos Morochz )

There wouldn’t be a lot of advantages to being a member of the Hyalinobatrachium yaku species. You’d be a frog for one thing. You’d be just 0.8 in. (2 cm) long too, meaning you’d be prey for, well, just about anything that lives with you in the Ecuadorean Amazon. But if it was any consolation, you could at least be sure you’d be unlikely ever to need an MRI, X-ray or CT scan again.

That’s because you’d be clear, as in transparent, as in wanna’-check-my-heart? Well, take a look.

The newly designated species was discovered by a team of researchers led by ecologist and biologist Juan M. Guayasimin of the Universidad San Francisco de Quito in Ecuador. From the start, they knew they’d have to do some very exacting work, but that there was reason to bother.

There are other frogs in the Hyalinobatrachium genus, some of which have been observed in the wild and some of which have been preserved as museum specimens. They are all about the same size and most of them are at least partly transparent on the abdomen. But the very act of preserving the animals for collections causes some discoloration of the skin, so other markings—such as telltale spots and different shades of green and yellow—may be lost or become indistinct.

Guayasimin and his colleagues thus reckoned that the rainforest could use one more going-over to determine if there were more species within the genus to be found. They surveyed 65-ft. (20 m) diameter plots near relatively narrow, shallow streams that the Hyalinobatrachium frogs were known to favor. In short order they found what they were looking for.

The new species, which takes its name from yuka, the word for water in the local Kichwa language, is distinct from other members of the genus in a few ways: the mating call is different, with an amplitude and duration unique to the species; the DNA is different; and the covering of transparent abdominal skin is significantly larger, reaching up to the chest and exposing the heart.

The species’ metaphorical heart is special too—at least when it comes to the males. Unlike other dads-to-be in the Hyalinobatrachium genus, the yaku males look after the clutch of eggs the female lays, protecting them from harm until they hatch. Still, there are certain kinds of harm that even the most vigilant male can’t prevent. The investigators cite numerous threats to the frogs’ habitat—including oil extraction, road development and stream pollution. The hope, as always, is that once people learn about the remarkable species that make the rainforest their homes, the forest itself might be tended more gently.

—With reporting by Elisa Kluger 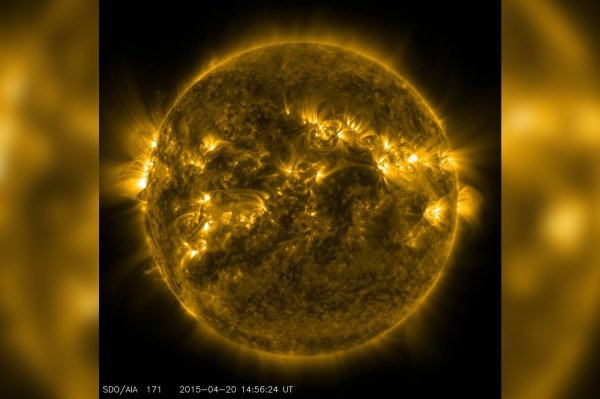 NASA Is Finally Sending a Mission to Touch the Sun
Next Up: Editor's Pick