Introduce the element of romance into a rock band, and the results can be, well, rocky. Just look at Fleetwood Mac, ABBA, the Mamas and the Papas, the Ramones. But introduce a rock band into a romance, and the effect can be transformative. Or at least that’s the hypothesis fueling the comedy — and the drama — in Zoe Lister-Jones’ Band Aid.

The movie, which charmed audiences at Sundance and expands to theaters around the country throughout the month, stars Lister-Jones and Adam Pally as Anna and Ben, a married couple cohabitating not so harmoniously in Los Angeles. She’s a would-be writer who, after a botched book deal, makes a living as an Uber driver to all manner of shady dudes. He’s a visual artist who designs soul-sucking corporate logos while pantsless at his kitchen table.

They fight constantly about domestic duties like dirty dishes, which — though they do desperately need to be washed — are really a stand-in for deeper emotional issues. Tired of the constant combat, Anna proposes an unconventional idea: what if they start a band and channel all their squabbles into song?

“The questions that surround the characters and the themes in the film are things that I’ve been grappling with for a long time, around why couples choose to stay together, and what it takes for a couple to choose to stay together,” says Lister-Jones, who is most recognizable for her roles on the sitcoms Life in Pieces and New Girl, but who has also had a notable career writing, producing and starring in indie films like 2009’s semi-autobiographical Breaking Upwards.

The genesis of the idea came not from a fascination with the healing power of music but from her observations of men and women in heterosexual relationships. Her obvious, if divergent, initial case studies: her parents, who divorced when she was growing up, and her own decade-plus partnership — both romantic and creative — with husband Daryl Wein, who executive produced Band Aid.

“These fights that I was having are fights that all of my friends are having, about almost the exact same subject matter,” she explains.

And much of it had more than a little to do with gender. “Making generalizations can be sort of dangerous, but I do see a lot of commonalities in the people that I know. There are traits that are really specifically drawn along gender lines that I see continue to become the battle lines drawn in heterosexual relationships.”

When Anna and Ben sit down to write their first song together, their brainstorm serves as a two-minute highlight reel of the battle lines Lister-Jone speaks of: He’s a slob, she’s judgmental. He’s lazy, she’s uptight. “You have emotions coming out of your ass,” he tells her, to which she responds: “You have no emotions, ever.”

The resulting songs — performed live on set to maintain a feeling of authenticity — are not so brilliant they they couldn’t have been dreamed up on the spot by two amateurs, but cleverly bopping enough to start filling the house at a local open-mic night. (Fred Armisen, as the next-door neighbor whose particular brand of quirk brilliantly begs the question, “harmless dork or closet serial killer?”, puts his considerable drumming skills to good use as the third member of the aptly named Dirty Dishes.)

Lister-Jones was not only interested in exploring gender dynamics in her characters’ relationship, but on the set of the movie itself. She hired an all-female crew to film the movie, which she says created a unique dynamic on set.

“I think that there is something that happens when women are alone together that’s really special, and I had been experiencing it in different circumstances, but never in the context of making art,” she explains.

Just as the way we are socialized along gender lines can inform the way we relate to others romantically, says Lister-Jones, it can also inform our behavior at work. Men and women, in her experience, tend to offer ideas in different ways. “I think women sort of pose thoughts as questions and like to take many things into consideration before coming to a conclusion. I think men are really direct and like to insert their voice with confidence, because they’re taught to from a young age. Women are taught to apologize for taking up space.” On her set, she says, “no woman was apologizing for taking up space.”

Lister-Jones says she feels a responsibility, as a filmmaker, to address the underrepresentation of women on film sets, even though it meant, on this production, telling some of her department heads they couldn’t hire men they’d worked with on previous projects. Or that some of the roles would be filled by women with shorter resumes, thanks in no small part to limited opportunities.

“I just knew that if I only said, ‘Let’s hire as many women as possible,’ we wouldn’t hire that many. That’s the trap that every production falls into, and the needle isn’t being moved in the way that it has to be in order to really effect change.” Because a marriage might be saved with song, but Lister-Jones knows it’s going to take a lot more to solve Hollywood’s problems. 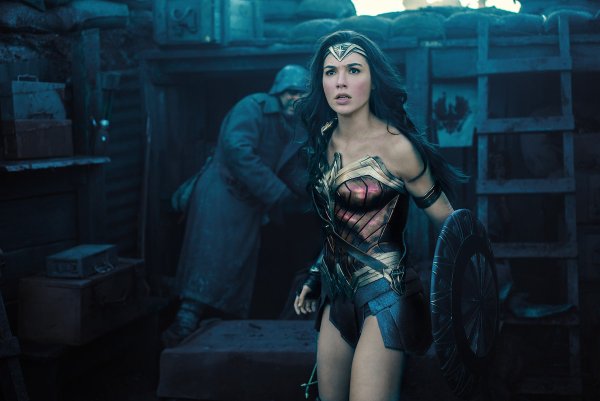 'A Triumph!' These Celebrities Are Flipping For Wonder Woman
Next Up: Editor's Pick