A television ad depicting a suicide bomber coming face-to-face with victims of terrorism has gone viral in the Middle East, racking up nearly three million views on YouTube over the weekend.

The ad, which was produced by Zain, a commercial mobile operator based in Kuwait, according to CNN, was released during Ramadan. During the Muslim festival, TV-watching tends to skyrocket in the Middle East, The Guardian reports.

The three-minute video shows a suicide bomber preparing a bomb and then walking through scenes of carnage he has created, including a bus and a wedding. Known survivors of previous attacks make appearances, including Ibrahim Abdulsalam, who was injured in a Kuwait mosque blast, and a bride who survived the bombing of her 2005 wedding in Amman, Jordan. An actor also plays the young Syrian boy Omran Daqneesh, who was injured in an airstrike in Aleppo, Syria.

As the video plays, a song with lyrics that include “Worship your God with love, with love not terror” and “Confront your enemy with peace, not war” can be heard in the background. The tune is sung by the Emirati singer Hussain al-Jasmi, who makes an appearance towards the video’s conclusion, during which he extends a hand to the suicide bomber.

The video has been met with both praise and criticism. Emirati writer Sultan Al Qassemi described the clip as “a beautiful ad on counter violence and extremism,” and many YouTube users have commented that the video is beautiful and powerful.

However, the inclusion of five-year-old Daqneesh has been a controversial one, with some arguing that he should not have been featured as his injuries came as a result of airstrikes launched by the Syrian government and its allies, rather than by terrorists. 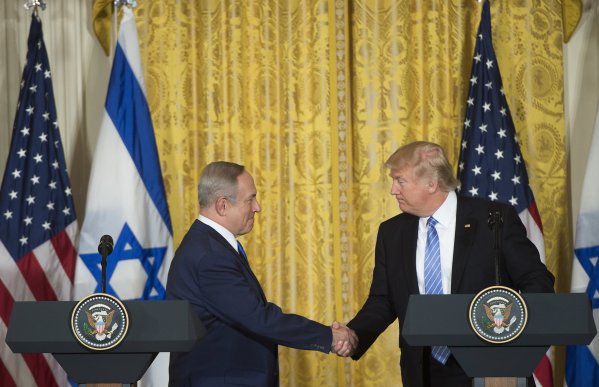 The 6 Biggest Questions Facing President Trump in Israel
Next Up: Editor's Pick