Secretary of Homeland Security John Kelly defended Trump’s son-in-law Jared Kushner Sunday following reports that he had attempted to set up a backchannel of communications with Russia.

“There’s a lot of different ways to communicate, backchannel publicly with other countries,” Kelly told NBC News’ Chuck Todd on “Meet the Press.” “I don’t see any issue here relative to Jared.”

The Washington Post reported Friday that Kushner had proposed establishing a secret communications channel with the Kremlin in a December meeting with Russian Ambassador Sergey Kislyak. Former National Security Adviser Michael Flynn, who resigned amidst controversy over his own contact with Kislyak, also attended that meeting, according to the Post.

The White House declined to comment on the report, but President Trump tweeted Sunday morning that reports about his administration with attribution to anonymous sources are “fake news.”

The Washington Post report came one day after reports that Kushner is the focus of the FBI’s probe into Russian interference in the 2016 election. Earlier this month, Deputy Attorney General Rod Rosenstein was appointed as a special prosecutor to oversee the probe.

When Todd pressed Kelly on the fact that Kushner was reportedly establishing communications with a country that is under investigation for possibly colluding with the Trump campaign and interfering in the 2016 presidential election, Kelly responded that the meetings were taking place during the presidential transition.

“I think any time you can open lines of communication with anyone, whether they’re good friends or not-so-good friends, is a smart thing to do,” Kelly said.

Kelly reiterated similar comments in another interview on ABC News’ “This Week with George Stephanopoulos,” telling Martha Raddatz any form of communication, particularly with nations that don’t have the best relationships with the United States, is a “good thing.” 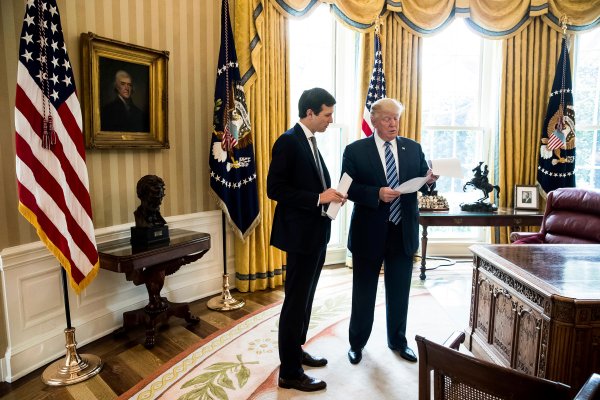