President Donald Trump said Saturday he would make a decision on the Paris Agreement on climate change “next week” following months of intense speculation and lobbying on both sides of the issue.

The announcement came as Trump departed this year’s G-7 summit in Italy without endorsing the landmark global warming deal which has support from nearly 200 countries, a move that put him in conflict with his counterparts from the world’s other leading democracies.

A joint statement from all seven countries acknowledged that the U.S. “is in process of reviewing its policies on climate change” while reaffirming the other nations commitment to addressing global warming. “Expressing understanding for this process, the heads of state and of government of Canada, France, Germany, Italy, Japan and the United Kingdom, and the presidents of the European Council and of the European Commission reaffirm their strong commitment to swiftly implement the Paris Agreement,” the statement says.

Trump’s first trip abroad provided him with a sense of the strong European support for the deal and, by proxy, the opinion of nearly every other head of state across the globe. Gary Gohn, Trump’s chief economic advisor, said this week that the president was “leaning to understand the European position,” when asked about Trump’s current position on the deal. “Paris has important meaning to many of the European leaders,” said Cohn. “And he wants to clearly hear what the European leaders have to say.”

The White House has repeatedly promised a decision on the Paris Agreement only to delay as the issue continued to divide Trump’s advisers.

Trump promised on the campaign trail to “cancel” the Paris Agreement arguing that it hurts U.S. energy interests, but actually exiting the deal has proven more complicated than Trump portrayed it on the campaign trail. The issue has divided his closest advisers with a group of hard-liners including Environmental Protection Agency (EPA) Administrator Scott Pruitt and senior adviser Steve Bannon arguing for withdrawal.

Secretary of State Rex Tillerson, along with Trump’s daughter Ivanka and her husband Jared Kushner, have pushed for him to remain in the deal. The agreement also has support from many corporations, including in the coal, oil and gas industries.

Leaders across the globe have insisted repeatedly that they will continue to implement the Paris Agreement if the U.S. withdraws. Indeed, the G-7 statement included a commitment not just to keeping the deal alive but to supporting developing countries in their efforts to address global warming, a key component that had been threatened by U.S. intransigence in the past.

“We are ready to continue to provide the leadership on climate change,” Maroš Šefčovič, vice president of the European Commission and the chief energy policymaker for the European Union, told TIME earlier this year. “We are are going to clearly pursue our goals in Europe, but we also want to continue our strong role in helping, especially in the developing world.”

But leaders also warned that a U.S. exit would damage the country’s global stature. French President Emmanuel Macron told Trump that it is “indispensable for the reputation of the United States and the interest of the Americans themselves that the United States remain committed,” according to an Associated Press report.

While the agreement might survive a U.S. departure, the absence of the world’s largest economy and second-largest polluter would complicate efforts to fight climate change effectively. Research has repeatedly shown even if current commitments are upheld, the world will fall short of its goal to keep global temperatures from rising more than 2°C (3.6°F) by 2100.

Even if the U.S. remains in the deal, Trump will likely weaken the commitments set under President Obama to reduce greenhouse gas emissions by at least 26% from 2005 levels by 2025. 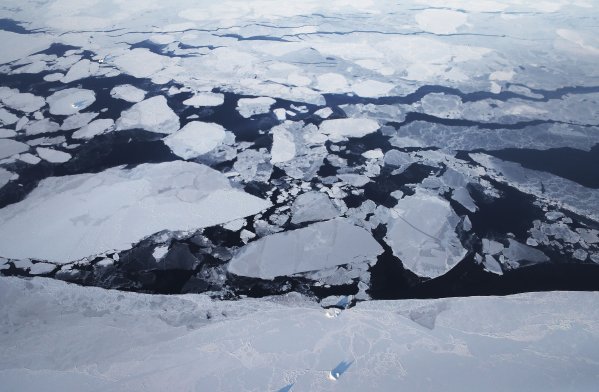