While reporting TIME’s cover story on Game of Thrones (whose seventh season premieres July 16), we stopped into a trailer where hair designer Kevin Alexander was helping prepare Emilia Clarke for a sequence as Daenerys — a process that begins with a bald cap, as a simpler mesh cap shows off too much of the actor’s dark roots. In between showing off Clarke’s four character wigs — nicknamed Dany, Diva, Candice (after another on-set stylist) and Blondie (formerly Bitch, as “she didn’t want to play”) — Alexander discussed a few of the show’s most memorable hairstyles.

Cersei, after the “Walk of Shame”

Our initial discussions with Dan [Weiss], David [Benioff], the writers, and the director of that episode, David Nutter, were about what they wanted to produce at the end of that sequence with the shorn look — cuts into the heads. [It was] as brutal as it could look, as far as we could go, knowing that we would have to use a wig. We also had a double, so everything we did, we had to do twice. There was a sequence of five wigs on the Walk of Shame, ten wigs because of doubles. We go from Cersei’s original hair — you see her in the cell, completely broken, everything’s matted — you then go into the sequence where they see her being cut, then you take that through two other sequences where she’s being attacked in the cell, there’s a montage through that sequence.

We had to work out how to get five wigs made, then cut them and break them down, to go on to that final look as we got into where she was completely shorn. My wigmaker Alex Rouse made a wig and had sections cut out of it. We made it an inch and a half of hair, so it was really short. There were sections left out so there could be cuts and grazings. What we had to do with Lena is put a bald cap on her because her hair is too naturally dark. Because we wanted to see enough skin, so we had to put the bald cap onto her as well, and then the wig would go on and fit over the bald cap. That would be placed and dressed and the blood and everything would be put in that.

Finding the color with Emilia and Daenerys took ages. Everyone named it a different color. Some people see it as a platinum, some people see it as a creamier blonde. But right at the start with that, everyone had an opinion — all the producers, the writers, everybody wanted a tone, so that took at least two, two-and-a-half months, with six or seven wigs, going back and changing the tone. It was literally about changing tones. And also, in the book, when you hear about her description, her hair is described as silver, but if you go too silver, it’s aging. We didn’t want to do that on a young girl’s face. Finally we achieved the color we found.

We started with one [wig], and then slowly over the period of the seven years, we’ve built [more] — they can get ruined really easily. They’re quite sensitive to atmosphere, so if in a fire scene, there’s too much smoke or whatever, they just go gray. You just lose them. They become a really dodgy gray like she’s been rolling around in the dirt.

MORE: Emilia Clarke on Why Dragons Are Daenerys’ True Love on Game of Thrones

The secret to Jon Snow’s hair

He’s lucky! He’s got curls. He loves it, we have to put it in there — it’s very much in his favor. He puts it up in his little topknot. We take his hair down a couple of shades to make it darker. There was so much reference at the start of series 1, because there’s so much reference in the book — the same with Sansa and Catelyn.

Seeing red with the Starks

Catelyn had jet-black hair when she came in, but she had to be red, and we had to find a palate everyone was comfortable with to make the reds work with the Starks. And we had to completely strip her color out and start with her — same with Sansa, putting that red in, and with Jon, taking it down to give you that really dark feeling so it was what the books were saying and we were really matching up. Robb Stark, gave him the red-brown.

When [Sophie Turner, who plays Sansa] was 13, she was really baby blonde. It’s nice because we’ve been able to play with colors for families and groups. You start to feel like you’re in one world and then you can move on to the next. With [Margaery], it was about keeping her soft so it didn’t bounce off Cersei. But as she became more powerful, the ‘dos became more elaborate and that’s where we were allowed to go with her to what you see at her wedding which is completely over the top. 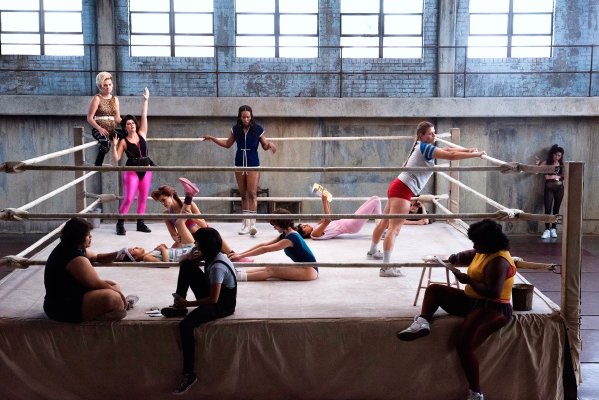 Review: Budget Wrestling Lights Up the Screen in Glow
Next Up: Editor's Pick