Did British Authorities Miss Chances to Stop the Manchester Bomber? Experts Have Sympathy

Almost every major terrorist attack by extremists on European soil over the last three years have been perpetrated by individuals already known to the security services — including Salman Abedi, the British man who killed 22 in a suicide attack in Manchester earlier this week.

But as some wonder how the U.K. authorities apparently missed numerous opportunities to prevent the bombing, experts pointed out that monitoring every suspected extremist as a potential terrorist would be not just an impossibly costly drain on resources, but a gross violation of civil liberties.

British counter-terrorism officials disclosed on Thursday that at any given moment they are running 500 active investigations looking at some of the 3,000 suspected Muslim extremists in the United Kingdom. Keeping tabs on all 3,000 suspected extremists at one time just isn’t feasible, experts say. Dominic Grieve, a Conservative lawmaker who chairs the powerful Intelligence and Security Committee in Parliament says “the bottom line is there is no such thing as 100% security.”

It’s partly a question of manpower. There are between 3,000 to 4,000 people working within Britain’s state security infrastructure, not including police forces, estimates Nigel Inkster, the former director of operations at MI6, U.K.’s secret intelligence service abroad, who now works at think-tank International Institute of Strategic Studies (IISS).

To mount covert surveillance on just one suspect would require teams of between 40 to 50 spies, he says. “You need to do is ensure your target does not get to see the same person twice or more frequently,” he tells TIME. “So you need to use a mix of operatives on foot and a mix of vehicles, and these are human beings who get tired, need loo breaks and lunch, and so they will need to be replaced.”

Agencies must have a strict criteria as to which networks and individuals and choose to focus their resources on. “These are not trivial considerations,” he says. “Once you put surveillance on somebody, you can’t keep on going if you don’t get results,” he says.

According to the Economist, the security services received funding to boost staff numbers by 15% (or by 1,900 people) 18 months ago. But to bulk numbers up to a point where they can feasibly cover every single potential extremist is impractical, says Inkster. “I think some organizations do have an organic size and if you do take it much beyond that there is a serious risk you will encounter diminishing returns,” he says, “more bodies does not necessarily translate into a commensurate increase in output and efficiency.”

Nor is it practical to perform electronic surveillance— be it monitoring e-mails, CCTV footage, wiretapping, and even their data—on every single suspect. The cost of that could run to hundreds of millions of pounds, according to Carlile.

Then there is the issue of sifting through countless reams of data. “There is a lot out there,” Inkster says. “Social media channels have multiplied enormously over the last 12 years and if you are pooling data from a whole lot of different databases: travel, financial, other forms of data.” Complex data algorithms can help filter the results, but, “simply knowing what data to look for in the first place can be quite a challenge ” he says.

There are also pressing civil liberties implications to unlimited monitoring of suspected extremists. “Some of them, believe it or not, are innocent,” says Alexander Carlile, a legal expert who was the U.K.’s Independent Reviewer of Terrorism Legislation till 2011.

Democracy is a balance between security and freedom, and every proposed internment or disproportionate increase in security service numbers tilts the state in a more autocratic direction. “We don’t live in a police state, thank God,” Carlile continues. “That is the whole challenge facing the government … obtaining the correct balance between civil liberties and the state protecting the public. This is art not science.”

Britain’s counter-terrorism forces have had notable successes in preventing terrorist plots, with at least 13 foiled since 2013. Many others were stopped around the time of the the 2012 Olympic Games in London. Sir Malcolm Rifkind, a former foreign secretary, tells TIME he has “quite a lot of sympathy” for British security agencies facing criticism over the Manchester attack. “It’s an almost impossible task to deal with one demented person who blows themselves up,” he says.

With reporting by Mark Leftly/London 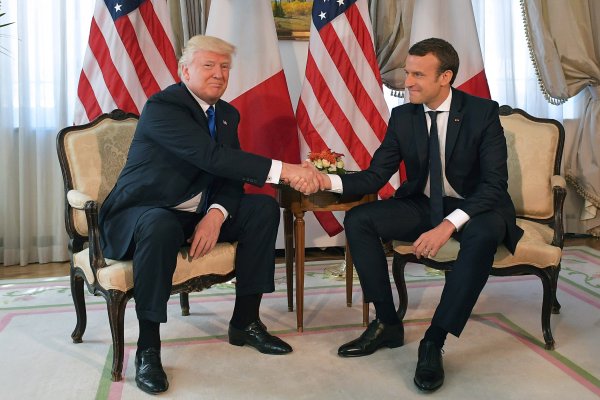 Donald Trump's Awkward Moments at the NATO Summit, Analyzed by a Body Language Expert
Next Up: Editor's Pick