U.S. House Speaker Paul Ryan spoke about the Congressional Budget Office's scoring of the GOP's health-care legislation and the outlook for raising the U.S. debt ceiling.
Zach Gibson—Bloomberg/Getty Images
Ideas
By Maya MacGuineas
MacGuineas is president of the bipartisan Committee for a Responsible Federal Budget, and a Director of FixUsNow.org .

The nonpartisan Congressional Budget Office (CBO) has estimated the House-passed “Obamacare repeal and replace” legislation will reduce deficits by $119 billion over the next decade. Congressional Republicans will see this as just what the doctor ordered because it likely allows the American Health Care Act (AHCA) to move to the Senate without the threat of filibuster under reconciliation rules. As the Senate considers the bill — and very likely makes a number of significant changes — it is worth reminding our members of Congress of the importance of slowing the growth of overall health care costs as part of any reform plan.

Most of the discussion in the coming weeks will probably be about ensuring adequate health insurance coverage, and that is an important conversation to have. But largely missing from the conversation is a focus on cost control, which is what is really needed to make health care affordable for the long haul.

Today, health care spending consumes 18 percent of the economy, up from 13 percent in 2000. Federal health spending alone consumes 26 percent of the budget. And both are growing unsustainably; Medicare and Medicaid, for example, are projected to nearly double in cost by the end of the decade. And rising costs are also placing an increasing burden on state, business, and family budgets.

There are opportunities to slow health care cost growth in ways that help the government and beneficiaries alike. Here are four types of changes the Senate should consider to help bend the health care cost curve.

First, when it comes to the delivery system, most insurance — and especially Medicare — pays for quantity rather than quality of care. The result is more tests, costlier procedures, and in many cases more care and treatment than what is medically desirable. In many areas, the health system has slowly started to move toward paying more for value and care coordination, but it’s time to accelerate these reforms. Accountable Care Organizations, bundled payments, managed care and various pay-for-quality models can all be adopted more broadly in Medicare and the health system in general. Provider payments should also be reduced in some spaces.

Second, in terms of consumer-driven health care, the current system drives up prices and utilization since insurance covers the vast majority of even predictable costs. Where possible, incentives should encourage people to buy care with more bang for their buck, not the reverse. That means fixing the Medicare benefit to replace generous first-dollar coverage with much-needed catastrophic protection. It means limiting supplemental insurance plans that drive up costs. And it means reforming Health Savings Accounts and insurance rules to better reward low-cost drugs and medical care. One of the ironies of health reform has been the attention placed on driving down costs for consumers by lowering their out-of-pocket expenses, without acknowledging that in the right instances, more skin in the game can ultimately lead to lower costs. Vastly increasing the transparency of health care pricing is also a needed improvement.

And finally, there is the employer health care tax exclusion, an unlimited tax benefit that economists of all stripes agree is a key driver of health care cost growth. A few years ago, CBO estimated eliminating it would reduce health spending by almost one-sixth. Sadly, past limits on the exclusion have failed. Obamacare included a “Cadillac tax” on high-cost plans, but that has been delayed and may never go into effect. Early versions of the House replacement bill included a more direct limit, but that proposal never saw the light of day. Congress should not give up on reforming this tax break — modifying it is vital to getting costs under control.

These are just a few of the cost containment measures that the Senate should consider. All would help slow costs economy-wide, and they would also generate savings that could be used to pay for any modifications to the House bill. Doing more to control health care costs will help the economy, the budget, businesses, and families — it is indeed a component of health reform worth investing in. 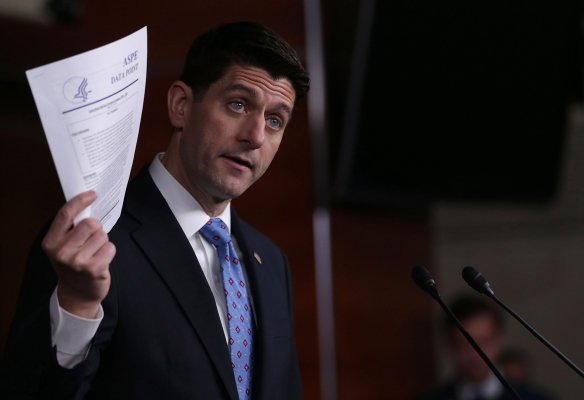 Will the Republican Health Care Bill Really Lower Premiums?
Next Up: Editor's Pick