Here's What Each G7 Leader Is Really Thinking About

The ongoing G7 meetings are packed with long speeches. Inevitably, minds wander. For those seated at the big table, here’s where they might be wandering.

Abe has no shortage of things to worry about. There’s a political scandal unfolding back home, though it’s not serious enough to threaten him or his ruling LDP party. He’s much more concerned about a rising China and an increasingly dangerous North Korea. Of all the G7 countries, Japan is in the most precarious geopolitical position, and Abe knows it.

Japan can’t afford to go it alone. That’s why Abe hopped the very first plane to New York City following Trump’s election victory in November to congratulate the new president and begin building a relationship. Abe needs the U.S. — and the rest of the G7 — to remain relevant and engaged in his part of the world. It’s why he continues to push for the Trans-Pacific Partnership trade deal, even if it doesn’t include the U.S., though he’ll probably be thinking about how to persuade Donald Trump to reconsider his decision to pull the U.S. out.

Gentiloni will probably be thinking about taking a few pictures, because this will be his first (and probably last) G7 summit. Italy is stuck in a political holding pattern. That’s bad, given the country’s financial problems. Former foreign minister Paolo Gentiloni was asked to form a caretaker government this past December when his predecessor’s constitutional referendum failed to pass, and the country has been limping along since. True, Italy is no stranger to political instability; it has had 64 governments in the 72 years since the end of World War II.

But while Europe continues to struggle with the rise of Euroscepticism, it’s the Eurozone crisis (now in its seventh year) that poses the most immediate threat to the European project — and Italy is at the center of it. With GDP of $1.6 trillion and a debt-to-GDP ratio of 133%, Italy is simply “too big to bail.” Gentiloni also has the Euroskeptic, anti-establishment Movimento 5 Stelle breathing down his neck (recent polls show M5S running neck-and-neck with Gentiloni’s Democratic Party at roughly 30% each). Imagine not only having the weight of your country on your shoulders, but all of Europe — that’s Gentiloni right now. Thankfully for him, Italy will hold elections no later than May 2018 — then it’s someone else’s problem.

Macron assumed the French presidency less than two weeks ago, but the campaign isn’t over. Macron will probably find himself thinking about next month’s parliamentary elections, a vote that will determine how much of a political force he’s likely to be. Will his newly-formed party, La Republique En Marche, win an absolute majority of seats? Polls show that he has a puncher’s chance, but the most likely outcome is a plurality that will force him to share power with the center-right Les Republicains. That’s not ideal for Macron, but far from catastrophic. This G7 meeting will be his first big test on the international stage, so he might also be thinking about ways to make the best possible first impression.

A grizzled veteran of multi-leader photo-ops, Merkel will likely catch herself reminiscing about days when the G7 was a G8, Russia’s Putin was still a welcome guest, and George W. Bush was passing out shoulder massages.

Maybe she’ll be thinking wistfully about how well she got along with Barack Obama, as we were reminded earlier this week during a joint appearance in Berlin. But Merkel now faces a new U.S. president, one who wants to rewrite the rules of the foreign policy game. As her chilly reception at the White House earlier this year showed, she’s not budging an inch. Not that she has to — in power for 12 years and likely to win a fourth term as chancellor this fall, Merkel enjoys the type of domestic support that most leaders can only dream of. Maybe she’ll be thinking about that while Trump answers questions about Russia.

Donald Trump is at the tail-end of an exhausting nine-day international trip. He’d like nothing more than short meetings largely free of policy detail. He has more important things to worry about, like showing the people back home that he’s the ultimate dealmaker, one who fights for them like no president ever has. He made a good start in Saudi Arabia, where he received a lavish welcome and cut a big arms deal.

There will be much less respect waiting for him when he gets back home. He might find himself thinking ahead to his next message for the media: This Russia story is no big deal. Smoke is not fire. Get this story wrapped up, and I’m well on my way to making America great again. Health care, taxes, infrastructure, boom. Or maybe he’ll be thinking how much better the chocolate cake is at Mar-A-Lago.

What a time to be neighbors with the U.S. As the U.S. is turning away from free trade (not even NAFTA is safe), Canada wants to diversify its own trade relationships. True, this was on Trudeau’s to-do list before Trump was elected, and it’s been part of broader Canadian strategy for many years. But it’s taken on new urgency as trade skepticism remakes American politics on both the left and the right. Canada has a new deal with the E.U., but if you want to be a player in the global economy — as Canada does — look to build ties in Asia in general and China in particular.

It’s good to be Canada these days. And if Trudeau can position himself next to Macron for the class picture, he can pass as an elder statesman.

Finally there’s the U.K., still reeling from this week’s suicide bombing in Manchester. Things were already complicated for Theresa May going into this G7 summit, given the opening of Brexit negotiations. May needs to secure a favorable deal from the Europeans ahead of their impending divorce, but she’ll also need as many friends outside Europe as possible, and the U.S. is top of the list. Given that Trump and Merkel aren’t particularly fond of one another, and this week’s controversy over U.K.-U.S. intelligence sharing, that’s a tough needle to thread. But thread it she must.

But she’ll also probably be pondering the general election she needs to win in just two weeks’ time. So far, May has done a good job convincing British voters that she’s the person to lead them into the post-Brexit era (polls show her Tory party with a commanding 9-point lead). Even before the sickening tragedy in Manchester, May’s six years as Home Secretary gave her solid security credentials. So while May will be in Sicily, her mind will be in Britain — as well it should be. 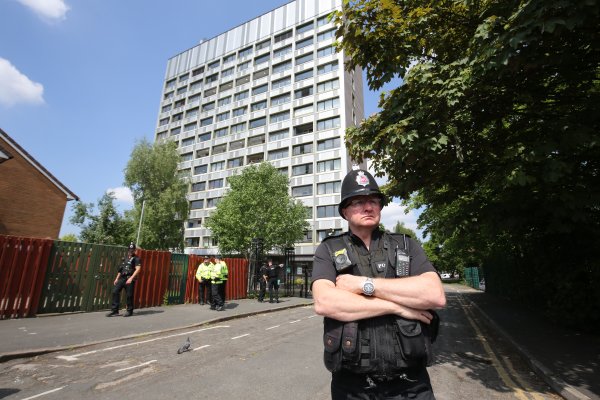 Did British Authorities Miss Chances to Stop the Manchester Bomber? Experts Have Sympathy
Next Up: Editor's Pick