LGBTQ People Are 'Nearly Invisible' in Major Hollywood Films, According to GLAAD Report

The report, which examines the quantity, quality, and diversity of LGBTQ representation on film, found that only 23 of the 125 movies released by major studios last year, or 18.4 percent, included characters identified as LGBTQ. That figure represents a slight uptick from 17.5 percent in 2015.

For the report, GLAAD focused on films released by Disney, Warner Bros., Fox, Universal, Sony, Paramount, and Lionsgate during the 2016 calendar year. Films released under art-house labels such as Fox Searchlight and Sony Pictures Classics were analyzed separately and did not factor into their parent studios’ evaluations.

Each studio was assigned a grade of excellent, good, insufficient, poor, or failing. (Previous reports featured only four grades: excellent, good, adequate, or failing.) No studio was rated good this year, and Universal was the only studio to be rated insufficient. Fox, Paramount, and Warner Bros. were rated poor, while Lionsgate, Sony, and Disney were rated failing. No studio has ever received an excellent rating.

In addition to finding that LGBTQ people were “nearly invisible” in studio films, GLAAD also said such characters were often treated as “outdated punchlines.” For example, only one transgender character was counted for 2016 — Benedict Cumberbatch as All in Zoolander 2 — and the character was criticized by some people as transphobic.

GLAAD did take note of some recent bright spots, including LGBTQ moments in last year’s Star Trek Beyond and this year’s Beauty and the Beast and Power Rangers. The report also mentioned Moonlight, which became the first LGBTQ film to win the Oscar for best picture earlier this year. (It was released by the indie studio A24.)

Overall, however, GLAAD said Hollywood studios are lagging behind when it comes to inclusion, particularly when compared to TV and streaming.

“With many of the most popular TV shows proudly including LGBTQ characters and stories, the time has come for the film industry to step up and show the full diversity of the world that movie audiences are living in today instead and end the outdated humor seen in many films,” said Sarah Kate Ellis, GLAAD’s president and CEO, in a statement. “Films like Moonlight prove there is a huge opportunity to not only tell LGBTQ stories worthy of Oscar gold, but to open the hearts and minds of audiences here and around the world in places where these stories can be a lifeline to the people who need it most.” 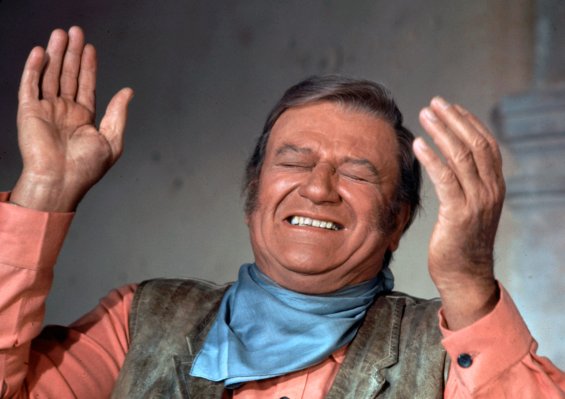 Behind the Scenes With John Wayne in 1969
Next Up: Editor's Pick