More than almost anyone in Trump’s circle, Pence is in demand
Alex Brandon—AP
By Philip Elliott

Like everyone else in official Washington, Vice President Mike Pence sometimes struggles to keep track of what is happening inside the White House. So he knew people would be closely watching when he traveled north on May 20 to deliver a commencement address for graduates of Pennsylvania’s Grove City College, a devoutly Christian school where chapel attendance is mandatory and federal student aid is rejected, freeing the institution to ignore nondiscrimination laws.

“Servant leadership, not selfish ambition, must be the animating force of the career that lies before you,” Pence told the graduates. The words were cribbed from his evangelical beliefs, but they also described the mission that Pence has adopted for himself, as the only person in President Donald Trump’s West Wing orbit who cannot be fired. “Don’t fear criticism,” the Vice President continued. “Have the humility to listen to it. Learn from it. And most importantly, push through it. Persistence is the key.”

Persistence in the face of criticism has been a central tenet of the 10 months Pence has spent at Trump’s side. He wields incredible influence within the Administration and has leveraged his deep relationships in town to help the President, guiding him through much of the haggling over a left-for-dead Obamacare replacement in the House and helping steer a number of executive moves that were cheered by groups that oppose abortion and promote Christian education.

It hasn’t all been smooth. At least twice, he has allowed himself to be dispatched to dispute stories with facts that are later shown to be incomplete at best. He wrongly trusted National Security Adviser Mike Flynn’s denial that he had been in touch with his Russian counterparts. Pence was later left out to dry when he tried to defend the President’s decision to can FBI Director James Comey.

The risk for Pence is that standing too close to Trump could hobble his political future. The Vice President is 57 years old, and his advisers doubt this is his last role in public life, even as they rightly cast talk of Trump’s impeachment or resignation as far-fetched. In fact, they recently helped him start a political action committee to help him boost his profile.

“He needs to get a leftover tightrope from Ringling Bros., because that’s what he has to walk–between being a good soldier, helping fight for the President and his agenda, while also keeping his distance from the whole Russia mess,” said Michael Steel, a Republican strategist and former top spokesman to then House Speaker John Boehner.

To date, Pence has followed the advice he offered the graduates, hunkering down, reaffirming his loyalty and modesty, serving the man who elevated him from the Indiana governor’s mansion to the White House. His advisers say the public embarrassments haven’t registered with voters, especially Trump’s loyal supporters.

Nor have the stumbles made Pence any less in demand. Though he did not travel overseas with the President, he is often Trump’s companion back home, sharing meals with the President and spending hours in the Oval Office. Lobbyists who want to meet with Pence find it wise to clear several hours to fit in a 10-minute chat, since there is always a good chance Trump will ask him to an unscheduled meeting or photo op. So they wait on the red couches in the White House lobby or the gold-and-blue armchairs in Pence’s West Wing suite, believing that the inconvenience is worth it.

Pence very much needs to stay in the President’s good graces in order to speak on his behalf. In recent weeks alone, he has been trying to cajole the House to take up a White House–backed version of tax reform, pushing the Senate to take the next steps to scrap Obamacare and leaning on the entire Congress to make good on the promise to pass an actual, honest-to-goodness budget that does more than punt hard choices to the next fiscal year. Amid it all, he is on his cell phone with lawmakers who want to check in on this parochial issue or that, knowing Pence will always take the call from friends, old and new alike.

It keeps Pence busy, as well as focused on what is possible. Fighting with Trump is seldom a wise course, and you don’t change a 70-year-old man. Trying to settle scores in this leak-prone White House is a losing proposition. So Pence dutifully pads to the end of the hallway when called, makes one turn and finds himself in the Oval showroom where the President entertains guests during freewheeling conversations that drive schedulers and political advisers bonkers. Pence is happy to take his spot in the gallery to watch the performance, a loyal and selfless servant with the goal in his sights. 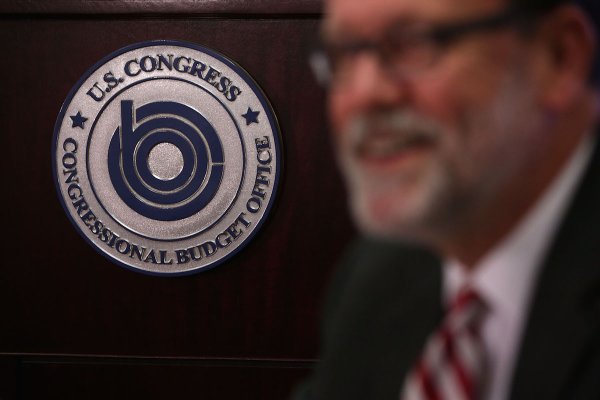 This Is Why the Congressional Budget Office Was Created
Next Up: Editor's Pick