Guardian reporter Ben Jacobs claimed Wednesday night that Montana Republican Greg Gianforte “body slammed” him, breaking his glasses in the process, after Jacobs asked him a question about health care.

The altercation happened during an event for Gianforte, who is running for Montana’s only congressional seat in a special election set for Thursday, at his campaign headquarters just south of Bozeman, Mont.

Early on Thursday, the Gallatin County Sheriff’s department announced that it had charged Gianforte with misdemeanor assault. The maximum penalty if convicted is a $500 fine and six months in jail. Gianforte is due to appear before June 7.

BuzzFeed News reporter Alexis Levinson retweeted Jacobs’ allegation and said that she was present at the altercation. “Ben walked into a room where a local TV crew was set up for an interview with Gianforte. All of a sudden I heard a giant crash and saw Ben’s feet fly in the air as he hit the floor,” she said in a series of tweets.

A spokesperson from the Hyalite Fire Department confirmed to TIME that it was “dispatched to an assault call” at the location, but would not confirm any names of those involved.

The Guardian subsequently posted an audio file of the altercation, where a crash can be heard just before Gianforte starts yelling.

A spokesperson from the Gianforte campaign released the following statement:

The audio released by the Guardian captured from the incident does not indicate that Gianforte ever asked Jacobs to lower the recorder.

Fox News reporter Alicia Acuna said she was also present at the scene along with producer Faith Mangan and photographer Keith Railey. Acuna said that after Jacobs “persisted with his question,” Gianforte “grabbed Jacobs by the neck with both hands and slammed him into the ground behind him. Faith, Keith and I watched in disbelief as Gianforte then began punching the man, as he moved on top the reporter and began yelling something to the effect of ‘I’m sick and tired of this!'”

Acuna’s description of the incident also contradicts the statement from Gianforte’s campaign. “To be clear, at no point did any of us who witnessed this assault see Jacobs show any form of physical aggression toward Gianforte, who left the area after giving statements to local sheriff’s deputies,” she said.

Brian Gootkin, Galatin County Sheriff, confirmed at a press conference late Wednesday that an incident with “allegations that an assault occurred” took place at Gianforte’s campaign headquarters at around 5 p.m. local time. Gootkin said that Gianforte was “briefly” interviewed after sheriff’s deputies responded to a call regarding the incident, while Jacobs was interviewed after he was released from hospital.

When later asked on CNN if body slamming is a crime in Montana, Gootkin said it would be “if there is an assault.” 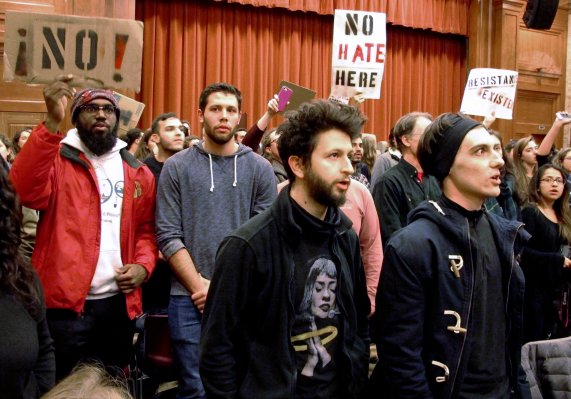 Middlebury Sanctions Students for Murray Protests
Next Up: Editor's Pick