Middlebury Has Sanctioned Students for Shutting Down Charles Murray's Lecture

Middlebury College has disciplined 67 students for their involvement in protests that shut down a lecture by conservative writer Charles Murray in March, the college said Tuesday, as local police opted against bringing criminal charges.

A total of 67 students were disciplined by the school for violating its policies on protests and general conduct, which prohibit “negligent or reckless use of physical force” and “prevention of another’s ability to communicate or move freely.” The sanctions ranged from probation to “official college discipline,” a more serious measure that places a permanent record in the student’s file, the college said.

Murray, a scholar at the American Enterprise Institute, was shouted down when he attempted to deliver his speech on March 2 and then physically confronted as he left the building with professor Allison Stanger, whose hair was pulled by demonstrators. Protesters also surrounded their car as they left the parking lot.

Murray has faced criticism for a 1994 book that linked intelligence with race.

“Forty-one students received sanctions from the College administration for participating in the first stage of the disruptive protest in Wilson Hall,” Middlebury said in a statement. “The remaining 26 students, who faced more serious consequences for actions in the hall and outside the building, were sanctioned by the College’s Community Judicial Board.”

In comments on Twitter, Murray criticized the college’s response as insufficient.

“Speaker shouted down. Professor seriously injured. Middlebury says ‘Naughty naughty’ to 41 students. Writes it down for 26 others,” he wrote.

The Middlebury Police Department said it does not expect to file any criminal charges in the incident “due to insufficient evidence against any specific individual” in the physical confrontation that injured Stanger.

Investigators said they identified some of the people who were in a crowd outside the building when Murray and Stanger left, and that many of them were not members of the college community.

“On consultation with the Addison County State’s Attorney it was determined that there was insufficient information to charge any specific person who participated in damaging the car or interfering with or blocking the car’s progress as it exited the parking lot,” Middlebury Police said in a statement. 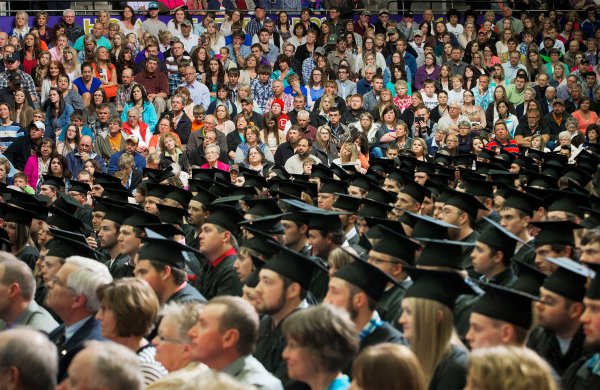 What Community Colleges Do That Universities Don’t
Next Up: Editor's Pick