A series of crowdfunding campaigns have raised more than £42,400 ($54,800) in support of a homeless man who said he rushed to the aid of people wounded in Monday night’s suicide attack at an Ariana Grande concert in Manchester. The attack left at least 22 people dead and 59 injured.

In a video broadcast by Britain’s ITV News, 35-year-old Steven Jones describes pulling nails out of victims‘ arms and faces. “It’s just instinct to go and help if someone needed your help,” he said.

ITV reports that Jones is a former bricklayer who has been sleeping rough for more than a year. Jones told ITV how he held up a woman’s legs to stymie the bleeding from a wound before emergency services could arrive. “We thought she was going to bleed right out,” he said.

One crowdfunding campaign, started by a man named Graeme Seddon on the website JustGiving, has raised more than $54,800 to help Jones “get back on his feet.”

Another JustGiving page set up to find Jones somewhere to stay was initiated by a Leeds-based woman called Diane Moore and has raised more than $37,500. “He said in an interview that he would like to think that people would help him if he needed it… so let’s do just that!” she wrote on the campaign’s homepage.

On Thursday morning, Moore, 48, told TIME she’d initially set out to raise £500 ($650) for Jones after seeing his interview on Facebook but that target had been “completely smashed.”

“I volunteer with the homeless in Leeds so am very passionate about helping them where I can,” Moore wrote in an email, adding that she was working with a local homeless charity to ensure the funds got to Jones.

Meanwhile, British businessman David Sullivan, the co-chairman of Premier League soccer club West Ham United, has offered to house Jones for six months, according to a series of tweets by his son Dave Sullivan Jnr. 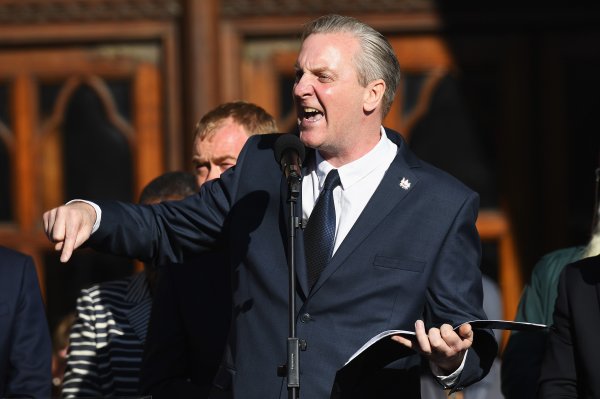