How to Write a Great Letter, According to One of History’s Best Correspondents

For centuries, biographers have been able to rely on a priceless resource when it comes to 18th, 19th and 20th century figures: their subjects’ epistolary correspondence. But things will be different for future researchers, who may worry about what kind of record emailing and text messaging are leaving. But although intimate handwritten letters arrive in our mailboxes far less frequently today, they nevertheless retain the fascination they had for earlier generations. If we’re lucky enough to get one, we tend to save it. Discovering a forgotten letter in a desk drawer can bring a dear person and lost moment of time right back into our present. A personal letter is still a very special gift to send someone.

Writing a fascinating letter, however, takes practice — and a good example to follow always helps. Take Jane Welsh Carlyle, one of the greatest practitioners during Britain’s golden age of letter writing. Married to 19th-century historian Thomas Carlyle, her work was not published in her lifetime, though all she wrote has now seen print and her letters can be read online. Born in Scotland, Jane spent most of her adult life in London in a house on Cheyne Row in Chelsea, where she wrote letters almost daily to her many correspondents. Here are a few lessons from her letters that still apply today:

Remember That a Letter Is Not a Diary

Jane Carlyle’s subject matter was principally herself and her London life, but like all the best letter writers, she kept her correspondents in mind. She did not write solipsistic monologues. She wrote for an audience. That puts her in an entirely different category from the letter writers who bore us, who write as if from the inside of a sound-proof closet.

When, on a cold, foggy London night, Jane Carlyle writes to a lonely governess in Devonshire—who has the thankless task of educating a naughty 11-year-old—she first speaks directly to her friend: “What are you doing, and thinking, and wishing, and hoping—for in Devonshire I suppose people can still hope—even in December—here the thing is impossible.” Only after Jane has established that connection to her correspondent, with a question to elicit an answer back (a thing much to be desired), does she proceed to tell the woman several amusing stories about her own life. When Jane does, she’s storytelling with a sense of audience, rather than writing what she called “feeling about feelings,” or personal moods best confided to a diary.

Don’t Be Afraid to Show Your Personality

Jane Carlyle wrote conversational, improvisational, very alive letters. While realizing the need to keep certain matters private, she valued frankness and directness — Scottish women had a certain reputation for being more outspoken than their middle-class English counterparts. Jane had phrases for her bright, clear, improvisational style. She told a cousin that she liked “splashing off whatever is on my mind . . . without forethought or back thought.” She simply had to “go on so . . . to the end of the chapter.” An ideal letter, Jane also said, should be “the real transcript of your mind at the moment.” Letters like that have a certain dashed-off effect. But despite a lack of attention to punctuation at times, it isn’t carelessness. It’s more like a Zen artist spontaneously drawing a black-ink enso, or circle, on white paper, where a tiny ink splash or two scatters off to the side. Much training and practice precede what leads to such an artistic high-wire act.

A wonderful example of this spontaneity — from a letter to a cousin — is Jane Carlyle’s description of the poet Alfred Tennyson as he sat one evening in her parlor. Jane adds in extra phrases, connected by dashes, as different thoughts occur, following the caprice of her mind. And incidentally she provides a picture of how even the best of men thought of women in the Victorian era: “Alfred is dreadfully embarrassed with women alone — for he entertains at one and the same moment a feeling of almost adoration for them and an ineffable contempt! Adoration I suppose for what they might be — contempt for what they are!” To make the diffident poet forget her “womanness” and relax, Jane plies him with manly accouterments: pipes, tobacco, brandy, water, and tea. “The effect of these accessories was miraculous—he professed to be ashamed of polluting my room ‘felt’ he said ‘as if he were stealing cups and sacred vessels in the Temple’ but he smoked on all the same — for three mortal hours! — talking like an angel — only exactly as if he were talking with a clever man — which — being a thing I am not used to — men always adapting their conversation to what they take to be a woman’s taste — strained me to a terrible pitch of intellectuality.” Much of what Jane writes is lightly ironic. She assumes her correspondents will understand and be amused.

Jane Carlyle’s subject matter ranged from high to low. Literature, politics, philosophy — although she didn’t like “-isms” (like Transcendentalism) no subject was avoided. But never in her life did she write a pontificating paragraph. Also, the Victorians greatly appreciated the charm of everyday life, and many of Jane’s subjects concern domestic matters. Darning stockings, finding her maid lying drunk on the kitchen floor after imbibing a pint of whisky, making half-moon cut-outs to decorate the window shutters of their library, serving hare soup to guests, nursing a headache — all are honored in her letters. She makes the everyday fascinating.

So: remember your audience, let your pen go free, be as truthful as you can, don’t fuss over commas, follow your mind where it leads, and consider no subject too small or too large — as long as you don’t lecture. It’s advice we might attempt to follow today.

Kathy Chamberlain is the author of Jane Welsh Carlyle and Her Victorian World: A Story of Love, Work, Marriage, and Friendship (The Overlook Press, April 2017). 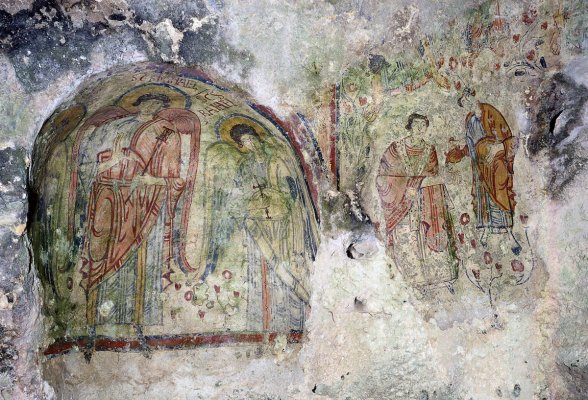 A History of Hunger Lies Beneath Italy's Food Culture
Next Up: Editor's Pick