‘I Hugged Her So Tight.’ 18-Year-Old Manchester Bomb Victim Had Met Idol Ariana Grande at Site of Attack

An 18-year-old girl who died in Monday’s bomb blast in Manchester, soon after seeing her idol Ariana Grande close a show, had met the pop star in person years ago in the same place she lost her life.

Georgina Callander, a health and social care student, frequently shared her love for Grande in more than a dozen social media posts before her life was cut short, along with 21 others, during a terrorist attack at the Manchester Arena.

“So excited to see u [sic] tomorrow,” she tweeted at the singer in all capitals, the day before her death.

Callander and Grande had first met almost two years ago during a meet-and-greet during the artist’s The Honeymoon Tour at the same Manchester Area. Callander posted a photo of the long-awaited 2015 encounter on Instagram. In it, she is smiling and gripping her favorite singer.

“I hugged her so tight and she said she loved my bow,” the fan wrote in another all-capitals caption. “I can’t get over this. I never will.”

A little over a year ago, Callander was brought to tears when the singer first interacted with her online. Grande had finally liked a tweet she had written about her. Callander repeatedly said she was so happy and “so grateful,” saying it was the “best day ever.”

Callander was a Runshaw College student, who had previously attended the Bishop Rawstorne Church of England Academy. Her alma mater remembered her as a “lovely young student who was very popular with her peers.”

The school said Callander “always made the most of the opportunities she had at the school.”

Grande, who was on her Dangerous Woman tour, said she was “broken” and “so sorry” following the tragedy. “I don’t have words,” the singer tweeted.

At least 22 people, including children, were killed, and about 60 others were injured in what officials say was the worst attack in the U.K. since 2005. 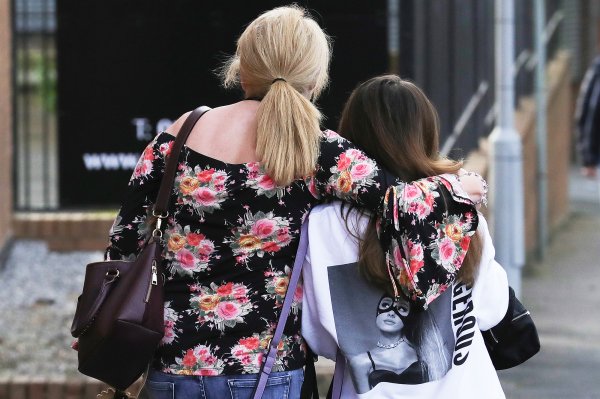 ‘A Mother Shouldn’t Have to Do This.’ Parents Frantically Search for Missing Children After Deadly Manchester Attack
Next Up: Editor's Pick