Officials Vow to Hunt for Missing Jet 'Till Hell Freezes Over'

The hunt for missing Malaysia Airlines Flight 370 must continue, Malaysian Prime Minister Najib Razak vowed on Thursday, just 24 hours after his top police official conceded that the mystery behind the ill-fated Boeing 777 may never be solved.

“We want to provide comfort to the families, and we will not rest until answers are indeed found,” Najib told reporters at the Perth air-force base in Western Australia, where search efforts are being coordinated. “In due time, we will provide a closure for this event.”

“I know that until we find the plane, many families cannot start to grieve. I cannot imagine what they must be going through,” he added. “But I can promise them that we will not give up.”

The Malaysian leader’s words served to walk back comments by his police chief Khalid Abu Bakar, who on Wednesday admitted, “We may not even know the reason for this incident.”

It’s now been almost four weeks since the twin-engine, 200-ton jetliner disappeared soon after taking off from Kuala Lumpur bound for Beijing with 239 people aboard. Both the aircraft’s transponder and ACARS communication systems were disabled from the cockpit “through deliberate action,” according to investigators, and subsequent analysis of data transmissions indicates it crashed somewhere in the southern Indian Ocean.

Frigid waters and waves several meters high means it is extremely unlikely that any survivors could have lasted more than a few hours, let along 25 days after vanishing from radar screens. Nevertheless, officials are determined to provide answers to the distraught families of those on board.

“We’ll keep going till hell freezes over,” Kim Beazley, Australia’s former Defense Minister and current ambassador to the U.S., told CNN. “It could take months, it could take years.”

Foul weather has long hampered search operations, but fairer conditions greeted Najib in Australia on Thursday, as eight planes and nine ships set out to scour some 86,000 sq. miles (223,000 sq km) of ocean — roughly the size of Utah — about 1,000 miles (1,600 km) west of Perth. Visibility of up to 7 miles (11 km) was expected, although isolated showers were slated to hit southern sections.

“Based on that continuing flow of information, the search area is being continually adjusted, and today it will be adjusted to move the search area a little bit further to the north,” said retired air chief marshal Angus Houston, the head of the Australian agency coordinating the multinational operation. Analysts from the U.S., U.K., Malaysia, China and Australia are still trying to narrow down the search zone, he added.

On Thursday, oceanographers revealed that currents and prevailing winds could well drive any floating debris toward Australia’s enormous west coast. “However, the search area is a long way offshore, so this could take months,” Alec Duncan of Curtin University in Perth told the South China Morning Post.

Australian Prime Minister Tony Abbott declared the search “the most difficult in human history” and separately told Chinese Premier Li Keqiang that the intensity of the efforts were being ramped up with the arrival of fresh equipment. “We cannot be certain for ultimate success, but we can be certain that we shall spare no effort and will not rest until we have done everything we humanly can,” he told reporters.

H.M.S. Tireless, a British nuclear submarine with sonar capabilities, is currently en route to aid search efforts, along with an Australian navy ship fitted with a U.S. black-box detector and an additional unmanned submarine.

It is hoped these will boost efforts to locate the plane’s data and voice recorders, which likely have less than a week of battery life left but remain crucial to unraveling what caused the plane to go so tragically off course.

On Thursday, Malaysian authorities cleared all 227 passengers of any involvement in the disaster. Around two-thirds of those were Chinese nationals, and both the Beijing authorities and Chinese relatives of those on board have been vocal in their criticism of Malaysia’s handling of the ongoing investigation. 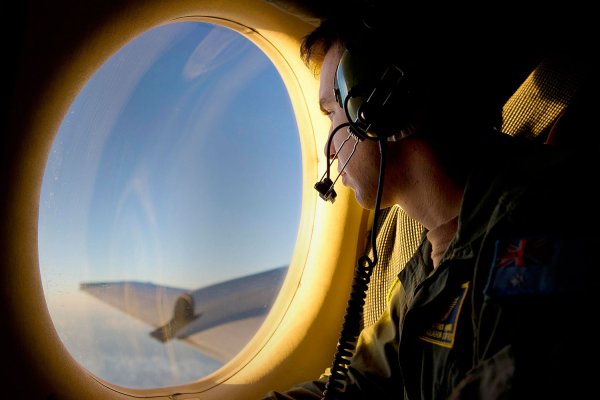 Officials Say Fate of Missing Jet May Never Be Known
Next Up: Editor's Pick