The Bachelorette Recap: A Penguin, a Doll and a Tickle Monster Vie for Rachel Lindsay's Heart

Welcome to the lucky 13th season of The Bachelorette where Rachel Lindsay will search for true love on national television. Rachel became The Bachelorette in an unusual way with the producers announcing her as the new star of The Bachelorette well before Nick Viall broke her heart on The Bachelor, which meant that the show’s trademark Dramatic Rose Ceremony was not very dramatic at all. Now going into the new season, they’ve already announced that Rachel’s “very much engaged.” So much for any will she-or-won’t she drama. Since we already know the ending, let’s get to the beginning.

Rachel Lindsay is a 31-year-old trial attorney from Dallas. She claims to have fallen in love with Nick Viall, but really? He’s an unemployed walking leather wristband and she’s an attractive, successful woman who deserves better than him. Rachel is already the Best Bachelorette Ever because she brought her dog, Copper, with her. Please let Copper be the next star of The Bachelorette!

There’s Kenny a friendly wrestler with an adorable 10-year old daughter; there’s another 31-year old Dallas lawyer with a tragic backstory; a square-jawed coding gym rat; a start-up bro who is saved from the reject pile by his love of Bollywood dance; and then there’s Josiah, a Florida lawyer with a tragic-turned-triumphant backstory and no, you’re crying.

Lucas is a big fat NO. Please apply to ABC for a full refund if you broke your television by punching it. Equally horrifying is Blake an “aspiring drummer” who talked about his little drummer on TV and explained all about his hearty libido. Hope his mom is watching!

The First Out of The Limo

The first person out of the limo is usually a front runner in the competition. This time that spot went to Peter, a friendly business owner with good hair and a fashion forward tux whose only defect appears to be that he’s from Wisconsin. Rachel declared him “cute,” so they’ll probably get married.

The All Male Revue

Prosecutor Josiah charmed her with legal humor (“You will have no reasonable doubt that I’m the man for you!”); there’s a Diggy and an Iggy; Bryan spoke Spanish but kept pronouncing his kisses like a chef, “Mwah!”; DeMario definitely had chemistry with Rachel; Anthony can speak in four languages (four!); and Will stepped out of the limo with a perfect Steve Urkel to Stefan Urquelle transformation.

Blake showed up with an entire marching band in an attempt to redeem himself after his lackluster performance when he was initially introduced on After the Final Rose; Frederick arrived with Rachel’s high school yearbook in tow, because he doesn’t have Facebook and knew her when he was in third grade; Lee sang a song for her, so he might end up with a record deal and a rose; Alex arrived with a vacuum cleaner and attempted to clean all the cooties off the driveway or something; Matt is this year’s dolphin and came dressed as a penguin promising “to waddle into [Rachel’s] heart.”

The worst man on the show may very well be Jonathan, who made quite the first impression by tickling Rachel. He earned the chyron “Tickle Monster” but somehow avoided getting kneed in the groin. Lucas didn’t want to lose his chance to be the worst person in the room, so he rolled up in a limo yelling about his testicle through a megaphone and then shook his head like a wet dog while yelling, “WAHboooooo!” Rachel managed to keep a straight face, but the men inside did not. Even the Tickle Monster rolled his eyes, muttering, “Let the circus begin!” Then Adam brought a mini-me called Adam Jr. which will probably come to life and murder the competition. Luckily, Kenny the wrestler promised to burn it himself if it moves.

Josiah, the sad-eyed attorney from Florida, boldly stepped up right away and whisked Rachel away for a little alone time. The men looked at him like they didn’t think he was Mr. Steal Your Girl and yet there he went with Rachel. The men clutched their drinks a little tighter in this brave new world.

Rachel bounced from man to model to penguin to aspiring drummer to creepy doll to the naughty third grader she used to know (that’s Frederick, who is all grown up), before looking around and realizing she was completely surrounded by men looming up on her like Walking Dead zombies.

Rachel claims she didn’t want to kiss anybody on the first night, but Bryan, the bilingual chiropractor, told her he was good with his hands and for some reason that line worked and they started making out. It was definitely more of a fourth date kiss than a first night one.

Lucas isn’t even drunk, he’s just incredibly obnoxious. The men hate him, Rachel thinks he’s a joke, the producers clearly think he’s amazing and can’t wait to see what he will do next.

Back on The Bachelor, Rachel earned the First Impression Rose from Nick Viall and she was so touched, so now she wants to give the rose to someone special. Obviously she picked the guy to boldly go where no man had gone before (at least on this episode). That man, of course, was Bryan who boldly shoved his tongue down her throat while whispering sweet words in her ear and when she handed him the rose, he did it again.

The first rose went to Peter, who was already a frontrunner since he was the first man out of the limo. Next came Stefan Urquelle, some other guy named Jack Stone, which sounds like an action hero, then came a Jamie, Iggy and Diggy, an Eric, DeMario, The Tickle Monster (wait …what?! Why, Rachel, why???), firefighter Bryce, the cleaning man Alex, Kenny the kind-hearted wrestler, Dean, the Penguin, multilingual Anthony, male model Brady, singer songwriter Lee and the aspiring drummer. Even Fred got a rose, even though Rachel thinks of him as a third-grader. Josiah was so frazzled he started talking about himself in the third person before he got a rose. Then Adam, but not Adam Jr., got a rose — forcing Adam to choose between Rachel and his creepy child, eventually leaving Adam Jr. to exact his bloody revenge on the mansion dwellers.

Rachel gave the last rose to Lucas. The producers clearly hate us, hate ratings and hate their crew and decided to force them to record Lucas saying, “WaaahBOOM!” over and over again in their earpieces. 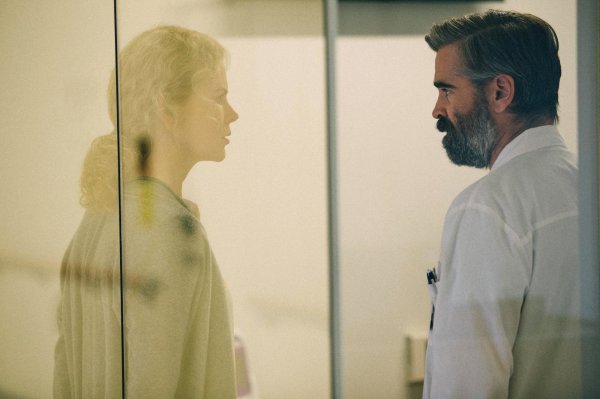 Enough Already With the Feel-Bad Movies That Are Supposedly Good for You
Next Up: Editor's Pick