President Trump Faces Polar Opposite in Meeting With Pope Francis

President Trump and Pope Francis have little in common. One rose to power championing his wealth and machismo, the other on a platform of humility and mercy. One wants to build a wall to keep migrants out, and the other preaches to welcome the stranger. When they meet for the first time on Wednesday morning in the Vatican’s Apostolic Palace, their competing visions of greatness will come to a head—with diplomatic and political consequences.

Trump’s break with his predecessor, on nearly every issue, has raised questions about how the U.S. and the Vatican will work together diplomatically going forward. President Obama and Pope Francis shared a political vision that pushed forward an historic detente with Cuba, an agreement for global climate conservation, and a commitment to abolishing nuclear weapons. Their unity marked a reversal in recent American politics, where Rome seemed to favor the Democratic economic policy agenda instead of the GOP’s social one.

Already, behind the scenes, top Vatican officials have expressed concern about Trump. When Republican Sen. Bob Corker of Tennessee visited the Vatican in February and met with Secretary of State Cardinal Pietro Parolin, he says “there certainly was not a glow” when it came to the new president. Democratic Sen. Tim Kaine of Virginia visited the same week. “There was a great alignment between the things we were trying to do in the world and the things that the Vatican was trying to do,” Kaine says of the Obama years. “Now I see more conflict.”

Trump and Pope Francis have long had a tense relationship. Shortly after Pope Francis was elected four years ago, Trump tweeted that Francis was not very “pope-like” and that he didn’t like that Francis paid his own hotel bill. When Pope Francis visited Mexico during the 2016 U.S. presidential primaries and said it was “not Christian” to build walls to keep out migrants, Trump shot back that Francis was “disgraceful.” When Trump was inaugurated, Pope Francis sent a note promising prayers and asking that America be known “above all by its concern for the poor, the outcast and those in need who, like Lazarus, stand before our door.” Last month, when Francis visited Egypt, he expressed concern that “demagogic forms of populism” were rising across the globe.

The Trump Administration’s refugee rhetoric and policy have been a significant point of tension. Kaine and Pope Francis discussed about the global refugee crisis for five minutes in Spanish when they met in February. “He said, I appreciate your support for the kinds of policies that I am talking about, but I hope you might be able to convince some who serve with you to see it the same way,” Kaine recounts. “The Vatican is deeply worried about a mindset that would paint refugees as terrorists, or refugees as a problem.”

This leaves the Trump administration looking for new points of unity as they envision a different relationship with the Vatican. So far, one main shared interest is fighting human trafficking. Ivanka Trump will visit the Catholic Community of Sant’Egidio during the visit to Rome, and she is expected to meet with several female human trafficking victims. Corker, chair of the Senate Committee on Foreign Relations, discussed his End Modern Slavery Initiative with top Vatican officials when he visited in February, and he has spoken with Trump deputy national security advisor Dina Powell in advance of Trump’s visit. “I see a tremendous alignment there,” Corker says. “We have had great meetings with the Trump team on this, I know it is something that Ivanka herself is interested in.”

Violence against religious minorities, especially Christians, in the Middle East could be another. Trump often made ISIS beheading Christians a talking point on the campaign trail, and his evangelical supporters like Franklin Graham have advocated for the issue to be a priority to Trump’s Washington.

Russia’s role in defending the Assad regime in Syria could be a hurdle. Putin, Corker says, “has done a tremendous PR job with the Vatican” making himself the defender of Christians in the Middle East. “You sit there going, my gosh,” Corker says. “Even though Putin has helped stoke the mass refugee crisis that we have in Europe … the narrative there is they are very upset with the United States over its refugee policy.”

Even though the appointment of U.S. ambassador to the Holy See was vacant until Trump nominated Callista Gingrich last week, some diplomatic efforts have continued. The Holy See has been significantly involved in brokering political dialogue in Venezuela, and when Under Secretary of State for Political Affairs Thomas Shannon visited Rome in April, he thanked Vatican officials for those efforts and discussed the need for prompt elections and the release of political prisoners, according to a State department official.

This Wednesday, Pope Francis has said he plans to listen to Trump despite their differences. As he told reporters recently when asked about the trip, “I never make a judgment about a person without hearing him out.” 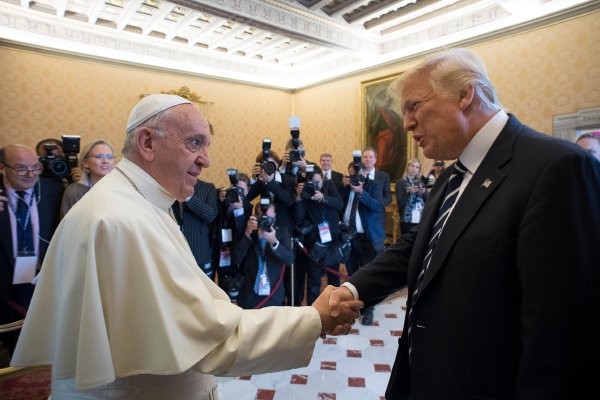 See the Highlights of President Trump's First Trip Abroad
Next Up: Editor's Pick