A scene from Oberlin College around the turn of the 20th century.
Library of Congress
By Erin Blakemore

In 1862, a young woman stood at a podium at Oberlin College and gave a graduation address, just like every other member of her graduating class. But, in some respects, Mary Jane Patterson was not like her fellow students. She was both African-American and a woman — and as she addressed the audience on the subject of Giuseppe Garibaldi’s revolutionary career in Italy, she was on the verge of becoming the first black woman in the United States known to have earned a bachelor’s degree.

It’s hard to track Patterson’s early life. Historians do know that she was the daughter of a slave, but it’s unclear if her father, a master mason, escaped slavery or was freed by his master. In any case, the Patterson family ended up in Oberlin, Ohio. At the time, Oberlin was a haven for African-Americans. Home to a large black population, it was known as an abolitionist town and one that regularly protected fugitive slaves. It was also home to Oberlin College, which had admitted African-American students since 1835.

Unlike many colleges, Oberlin admitted not only African-Americans, but also women. Black students had graduated from the school, but without a four-year collegiate bachelor’s degree. Patterson changed that. And, though Oberlin offered a two-year course for women, she insisted on taking the “gentleman’s course” of study.

As one future student, Fanny Jackson, recalled, the course was not forbidden to women, but not recommended, either. “They did not advise it,” she wrote. “There was plenty of Latin and Greek in it, and as much mathematics as one could shoulder.” At the time, women were not expected to immerse themselves in classical languages, mathematics or science, but Patterson bucked the trend and took her place next to a class of white males.

She held her own. When she graduated in 1862, it was with high honors. Now, she decided to challenge herself not as a student, but as an educator. After teaching in Ohio for a year, she moved to Virginia. In a letter of recommendation, her principal at Oberlin recommended her as “a superior scholar, a good singer, a faithful Christian, and a genteel lady.”

But though he recommended she be paid the most available to women, she only stayed at the job for a year before moving to Philadelphia. There, she taught at the Institute of Colored Youth (now Cheyney University of Pennsylvania), the oldest predominantly black institute of higher education in the U.S., before moving to a preparatory high school for African-American youth in Washington, D.C.

Patterson went on to break other barriers. In 1871, she became her school’s first black principal; she served in that role for two years until she was demoted in favor of the first black man to graduate from Harvard. She took her position again the next year, but left after nearly a decade when she was told that the thriving school was now so big it needed a man in charge.

As a fellow Oberlin student recalled, “She was a woman with a strong, forceful personality, and showed tremendous power for good in establishing high intellectual standards in the public schools.”

In the years since Patterson’s educational triumph, other contenders for the “first” title she commonly holds have been discovered by historians. One of them, Lucy Stanton Day Sessions, is now thought to be the first black woman to graduate with a degree, but she graduated from a women’s course at Oberlin that did not award a bachelor’s. And Grace A. Mapps, a poet, graduated from a four-year college in New York in 1852, but it is unclear if she was awarded a Bachelor of Arts or some other degree.

Each of these women — and the other African-American women who aren’t named here — fought for an education during a time when Americans could not even agree on whether to they had the right to be citizens. Patterson died in 1894, and though her name is largely forgotten today she left a rich legacy as both an educator and an early example of educational attainment in the African-American community. 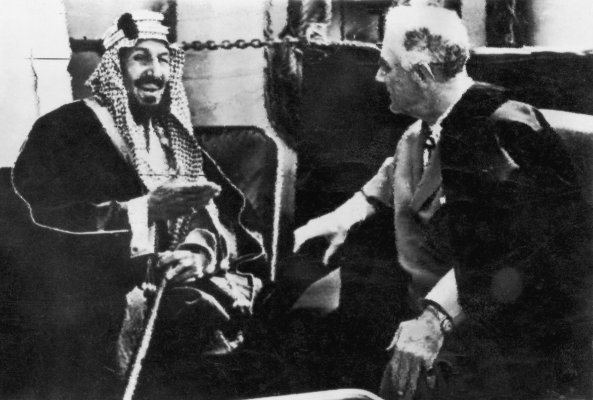 Inside the Historic Meeting Mentioned in President Trump's Saudi Arabia Speech
Next Up: Editor's Pick