How Elizabeth Warren Turned a Tattoo Into a Governing Principle

Elizabeth Warren can’t get enough of the tattoos.

Strangers have been flashing their fresh ink at the Massachusetts senator ever since Senate Majority Leader Mitch McConnell interrupted her on the Senate floor in February. McConnell’s admonishment for speaking out of order—”She was warned. She was given an explanation. Nevertheless, she persisted”—has become a feminist mantra among Warren fans, fit for body art.

At town halls and book signings, Warren says, people approach her with those words stitched into their skin. Others have put the words in needlepoint or on signs or t-shirts, bringing them to her like votive offerings.

“They have made ‘Nevertheless, She Persisted’ their connection to America’s future,” Warren told TIME in an interview last week. “They will not sit down and be quiet. Not ever again.”

This is an interesting story to tell a reporter who asked whether “Nevertheless, She Persisted” would be a good presidential campaign slogan in 2020. It is not exactly a denial. After all, Warren is a voice in the wilderness for progressives looking ahead to the next presidential election, and her recent tour promoting her new book has only raised speculation about her presidential ambitions.

In recent months, Warren has aimed her sharp-edged colloquialisms at the White House, railing at Trump for delivering a “gut punch” to “America’s working people” and of days in Washington that make her so angry “I could spit.” Warren told an audience at a progressive conference in the capital last week that “money slithers through Washington like a snake.” That is the kind of soapbox rhetoric that elicits eye-rolling on Capitol Hill. It’s also the campaign message of the last two candidates to win the presidency.

For now, however, Warren is more likely to describe “Nevertheless, She Persisted” as the mantra that explains how she sees her role in Washington these days. During the Obama years, Warren emerged as one of the more effective Democratic critics of Wall Street, and was responsible for key regulations policing the financial industry. Now, in the Trump era, she sees renewed efforts on Wall Street to “roll back the protections that decrease the likelihood that financial giants will blow up our economy again,” she tells me.

Much of her energy has recently focused around reviving back a powerful Depression-era law called Glass-Steagall, which for over 60 years created a wall between run-of-the-mill commercial banking, like savings accounts and loans, and the riskier world of investment banking. Franklin Delano Roosevelt signed the law in 1933 to reduce risk in the market and to shield people’s savings. Under pressure from Wall Street, Congress repealed it in 1999. Warren believes that was a mistake.

In a closed-door meeting in April between the Senate Banking Committee and Trump’s chief economic adviser Gary Cohn, Warren asked whether Trump would follow through on a campaign promise to reinstate Glass-Steagall. To the surprise of the Republican senators in the room, Cohn, a former Goldman Sachs trader, expressed his support. “One of my Republican colleagues said partway through my exchange with Mr. Cohn, ‘What! Did you really mean to say that?’” Warren says, laughing. In practice, the White House has shown little interest in the law, but Warren has nevertheless cosponsored a bill that would reinstate it.

Warren is also preparing for a new Republican challenge to Dodd-Frank, the sweeping 2010 law that regulated Wall Street after the financial crisis. She has a personal attachment to Dodd-Frank: as a professor at Harvard Law School ten years ago, she came up with the idea for the Consumer Financial Protection Bureau, which fines banks and regulates disclosures to consumers and was created as part of the 2010 law. It recently extracted a $100 million fine from Wells Fargo for creating fake accounts and has obtained some $12 billion in relief for consumers through enforcement.

Under a new Republican bill, CFPB would be subject to Congressional appropriations and a weaker governing structure. Warren is incensed. “The consumer agency is the watchdog to make sure that families don’t get cheated on credit cards, mortgages, payday loans and other financial products,” Warren says. “The Republican bill is about leashing up the watchdog so it can’t do its job.”

Dodd-Frank prohibited banks from making certain risky trades, and ensured their balance sheets did not contain too much risk. It also created an orderly process for federal regulators to wind down failing banks that could threaten the economy. The Republican-sponsored bill would repeal many of the law’s regulations and weaken the Securities and Exchange Commission’s ability to levy fines on bad actors.

Republicans say their bill would relieve pressure on community banks and juice the economy. Warren disagrees. “There’s a problem with the Republican argument: Facts,” she says. “Lending is at an all-time high. Small banks, large banks, have made money available. The difference now is they can’t cheat people in the same ways that produced those extraordinary profits in the early 2000s and that crashed so many families.”

Warren has sometimes had a complicated relationship with those in her own party, particularly when it comes to money. She has strongly criticized the influence of super-PACs and “dark money” groups that do not need to disclose their donors. Last month, she said that she was “troubled” that former President Obama would receive $400,000 for a speech later this year investment firm in New York. But Hillary Clinton’s new political group, “Onward Together,” which is structured so it does not have to reveal its donors, may not face her ire. “I have just now seen it, so I don’t know anything yet about the details,” she told me when I asked her about it — though she had tweeted positively of Clinton’s group days earlier.

One of the ironies of being a Democrat in the Trump era is that while Warren has few political levers to pull, she has perhaps a more devoted following than ever. Warren, who is preparing to run for re-election in 2018, tells a story about a woman at an event the other week who showed her a “Nevertheless, she persisted” tattoo and told her, “I’m here forever. I’m in this fight.”

“I just love it,” Warren tells me.

Doesn’t that sound like encouragement to run for president?

“Well, it sounds like encouragement to make a change here in Washington,” Warren responds. Which doesn’t sound like a no. 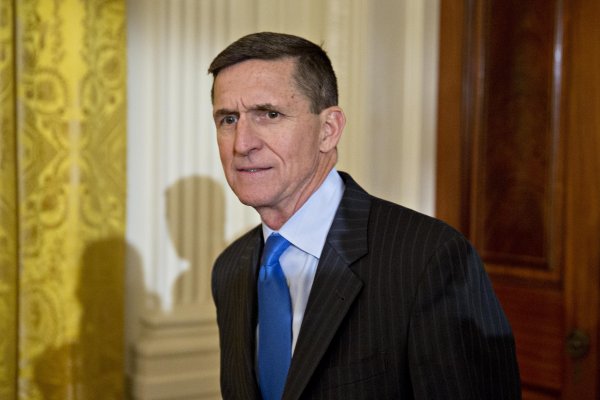 Here's What Happens When You Defy a Congressional Subpoena
Next Up: Editor's Pick