A Pennsylvania father who authorities say left his three young children home alone — locking one in a makeshift cage — now faces endangerment charges, police said. But the children’s mother insists she and the father are “not bad parents.”

Authorities said Cecil Kutz, 38, locked his 22-month-old son inside a “homemade cage” and left his other 1-year-old son alone in a playpen and a 1-day-old girl in a baby seat for at least 40 minutes last Wednesday. Tiffany George, his girlfriend and the children’s mother, was hospitalized at the time.

Pennsylvania State Police Trooper David Beohm said the oldest child was locked inside a cage made from plywood and lattice. “The boy in the cage seemed fine when we got on location,” Beohm said, adding that the cage had been used before.

George, who declined to comment Monday, told CBS 21 and the Associated Press last week that her children were never in any danger. “We’re not bad parents, and that’s all I’m going to keep saying,” the 26-year-old told CBS 21. “We did not lock our children in a cage. That’s just not right. It’s a false statement.”

George said the enclosure was more of a crib or a playpen. She said Kutz made a “mistake” by leaving the children alone. “I don’t agree with him. I’m very upset with him. But, people do make mistakes. Maybe he was panicking,” she said. George was taken to the hospital after giving birth at home the night before. Police said Kutz told them he had left the children alone so he could visit his wife in the hospital, but George said he never showed up and she’s not sure where he went.

She told the AP that the Schuylkill County Children Youth Service had approved the enclosure, although the local child welfare agency did not confirm that.

The three children are in Schuylkill County Children Youth Service’s custody. “Because of him, I just lost all of my kids,” George told the AP. “It hurts. It hurts.” 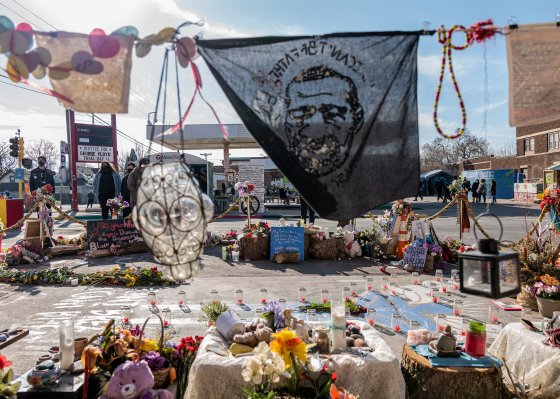