Adam Sandler is a people-pleaser. His childlike eagerness to be the clown everyone loves has both built him a fortune and earned him a reputation as the lowest common denominator of comedians. He’s not just a star, he’s an adjective, a descriptive word that “educated” people trot out when they’re trying to prove the superiority of their taste. Sandler has made some terrible movies but, off and on, he hits it. My particular favorite is You Don’t Mess with the Zohan, in which he plays an Israeli counter-terrorist commando who dreams of being a hairdresser. His performance is driven by exasperation: Why can’t people can’t just get over their own nonsense and work things out? His character is sweet, but also wised-up. Sandler is an adult playing at being a naïf, instead of the other way around.

The Meyerowitz Stories (New and Selected)—directed by Noah Baumbach and playing at Cannes in competition—gives Sandler one of those serious roles he gets now and then, a la Punch Drunk Love or Funny People, and may be getting more of. As comedians age, it’s harder for them to skate by on just acting cute, as Sandler has often done. But he can do more, and The Meyerowitz Stories proves it. His character, Danny Meyerowitz, is the son of an aged sculptor, Harold (Dustin Hoffman), an embittered codger whose puffed-up ego has the spiky spines of a blowfish. Danny loves his dad, and, perhaps even more surprisingly, loves his dad’s art, which is probably not very good. (The sculptures we see look like shop-class blocks of wood arranged in stark formations.) At the start of this mini family saga—it’s divided into clever-cute J.D. Salinger-style chapters—Danny shows up at the sprawling downtown New York apartment Harold shares with his half-protective, half-checked-out alcoholic wife, Maureen (Emma Thompson, who has little to do but flit around in artsy caftans). He’s not entirely welcome, but he’s at a loss: His daughter (Grace Van Patten) is off to college, and he and his wife are finally calling it quits. He doesn’t really have a job or a place to live.

MORE FROM CANNES: Okja: A Super-Cute Super-Pig Made to Suffer Supremely

As if bunking with the folks for a month or so weren’t demoralizing enough, we see early on that in his father’s eyes, he can do nothing right. Danny and his sister, Jean (Elizabeth Marvel, who has the spacy, deadpan precision of the young Elaine May), are the products of Harold’s first marriage, to a woman we never meet. His “second” family is Matthew (Ben Stiller), born to wife number two (Candace Bergen). Matthew is now a hyper-successful Los Angeles accountant, and Harold inserts his name into just about every sentence, often while simultaneously cutting Danny down. For the most part, Danny just rolls with it, but Sandler shows us—without any mawkish self-pity—how he crumples a little inside with every blow.

Sandler is terrific here, even if you’re not sure you can stomach another man-child shuffling around in rumpled shorts. (We’ve got enough of those in real life.) The movie overall is Baumbach in psychoanalysts’ mode, weighing the multitudinous horrors—and occasional meager joys—of parent-child relationships. His characters talk a lot, both to and around each other, and it can wear you down fast: Though it’s all supposed to be lacerating and honest, there’s also something preciously self-conscious about the picture. Baumbach clearly has a lot of thoughts, and he makes sure to include all of them. One line out of every five is pretty good, and every once in a while he hits a note of brilliance with the precision of a bug zapper frying a mosquito. I laughed out loud—a sharp, uncomfortable bark of a laugh—at a scene in which a hospital grief counselor recites a laundry list of things one might want to say to a dying parent, rattling through it as if it were an actual laundry list.

But sometimes it’s as if Baumbach can’t distinguish between generosity toward his characters and sentimentality. He gives them all sorts of jibes and wisecracks and looping soliloquies, as if we can’t see that it’s all just a lot of fancy dancing so he won’t have to let his guard down. Baumbach seems to want his characters to be as smart and skeptical as he is, all the time. Thank God that, at the movie’s end, he gives Sandler just the right note to hit. It’s the moment of catharsis we’ve been hoping for, an instance of selfishness as self-preservation. Sandler’s Danny is transparent, almost in defiance of Baumbach’s acute need to be articulate every minute. Sometimes Danny just doesn’t know what to say, and so he says nothing. That’s when you feel the most for him. 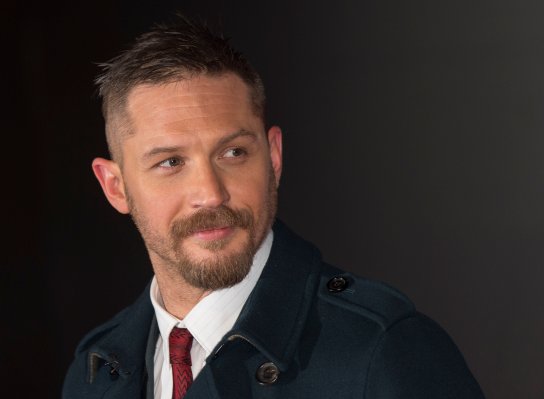 Tom Hardy Will Star in Spider-Man Spinoff Venom
Next Up: Editor's Pick