Saturday Night Live bid farewell to two of its longtime cast members, Vanessa Bayer and Bobby Moynihan, in a graduation skit during the season finale.

“Something isn’t right. Are we in the upside down?” SNL’s Kyle Mooney asked, referencing the parallel universe in the show.

Bayer had been on SNL for seven seasons and Moynihan for nine, according to Deadline. She posted about her tenure on the show just hours before the finale aired, writing, “Thank you SNL for 7 years of laughs, love and incredible memories. It has been a dream come true.”

Both Moynihan and Bayer were featured throughout the finale, bringing back some of their most memorable roles.

Moynihan stopped by the show’s Weekend Update as a “drunk uncle,” where he praised President Trump for giving him a renewed sense of opportunity, rejoicing that “a white guy has a chance to make it in America again.”

And Bayer reprised her role as the meteorologist Dawn Lazarus, where she provided a forecast for Memorial Day Weekend. 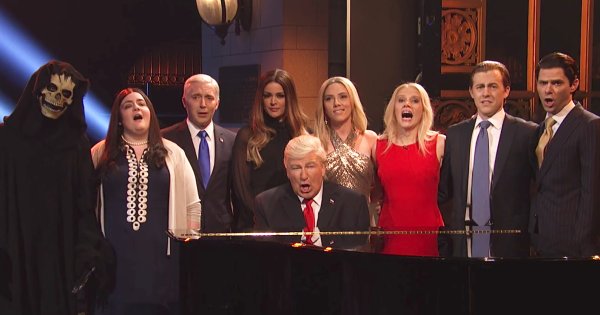 All Your Favorites Showed Up For SNL’s Season Finale
Next Up: Editor's Pick