He’s a celebrity with no history of serving in elected office, a huge social media following and a project to promote. After musing that he might run for president, he’s gotten profiles in both the entertainment and political press and a softball interview from Jimmy Fallon. This weekend, he’ll be on “Saturday Night Live.”

No, this isn’t Donald Trump in 2015—or any number of years before then, for that matter. It’s The Rock in 2017. And it shows that the media has learned nothing from how it handled the real estate mogul’s past flirtations with politics.

To be fair, Dwayne Johnson meets the qualifications for becoming president under the Constitution: He’s 45 and was born in California.

On the political side of the ledger, he’s a fresh face—often a bonus—who spoke at the 2000 Republican national convention, attended the Democratic convention that same year and is now a registered independent. He gives good interviews, was named the Sexiest Man Alive in 2016 and has an above-average Q score (the celebrity equivalent to political approval ratings). He might very well make a decent candidate.

But Johnson isn’t being treated as a potential candidate for the leader of the free world. He’s being treated as a celebrity. And that means that he’s getting tons of free publicity for his theoretical campaign—benefiting him personally—without being asked any of the tough questions about what he would actually do if elected.

Consider this quote Johnson gave in a British GQ interview in June of 2016, a year after Trump began his campaign: “I can’t deny that the thought of being governor, the thought of being president, is alluring. And beyond that, it would be an opportunity to make a real impact on people’s lives on a global scale.”

This quote is so far beyond the bland pablum that even professional politicians serve up as to be completely useless in gauging what kind of campaign he might run—and that’s it. The headline on the article? “Dwayne Johnson for President.” The final line of the article: “President Rock… kind of has a ring to it, doesn’t it?”

Nonetheless, the quote did the trick, getting The Rock’s presidential ambitions favorable coverage in the Washington Post, the Washington Examiner, Fox News, Bleacher Report and VICE, among other outlets. Naturally, he returned to the playbook this year as he set out to promote his “Baywatch” movie.

GQ, the American version this time, kicked it off with an article headlined “Dwayne Johnson for President!” (The exclamation point was apparently necessary to distinguish it from the earlier article.) And what does he have to say about campaigning to become the commander-in-chief of the world’s top military superpower: “I think that it’s a real possibility,” he says solemnly.

The article also notes that both Hillary Clinton and Donald Trump’s campaigns reached out to him for an endorsement in 2016. He says he didn’t give one because he didn’t want to “make people unhappy” about his political views or “sway an opinion, which I didn’t want to do.” (Presidential endorsements are typically intended to sway opinions.)

The author pressed him a little on the issues. Johnson said he “completely” disagrees with the “Muslim ban”—a poorly worded question that leaves unclear whether he’s being asked about Trump’s proposal to shut down Muslim immigration or the travel ban that the Administration claims is unrelated. Asked about Trump’s performance, he says “poise” and “leadership” are important. And then he says this:

In a “Tonight Show” interview with Fallon Thursday, Johnson gets similarly thoughtful about the presidential chatter, which he has spurred on:

Johnson also mentioned that he likes to “spend time with the troops” in that interview, a theme also pushed in a cover story in the conservative National Review. This is a serious political magazine, which wrote a cover story calling him “The Celebrity We Need,” and it includes this line: “We know The Rock loves America, but we can’t begin to guess where he stands on the EPA’s Clean Power Plan.”

Everything we know about Johnson’s politics can be summed up in a fairly short sentence: He loves the troops, thinks we should all come together, likes leadership and thinks the president should have poise. That’s it. In exchange for these paltry offerings, Johnson has already received millions of dollars of free publicity, possibly boosting the box office returns of his next movie and setting him up to start a presidential campaign—should he actually run—with an advantage over any rivals.

He’s even been included on a poll testing various potential candidates against Trump in 2020. That poll, which found him beating Trump by five percentage points, garnered even more publicity, despite the fact that he did worse than former Vice President Joe Biden and Sens. Elizabeth Warren, Cory Booker, Bernie Sanders and Al Franken.

This is how Donald Trump, a TV celebrity with a much lower Q score, ended up earning at least $2 billion in free publicity in the early stages of his campaign, according to the TV ad tracking company SMG Delta, often while offering very little in the way of substance on what he would actually do as president.

The Rock may end up as a candidate—even a good candidate—or he may just be milking free publicity. But he’s not being treated as a serious candidate, and that’s a mistake the media has made before. 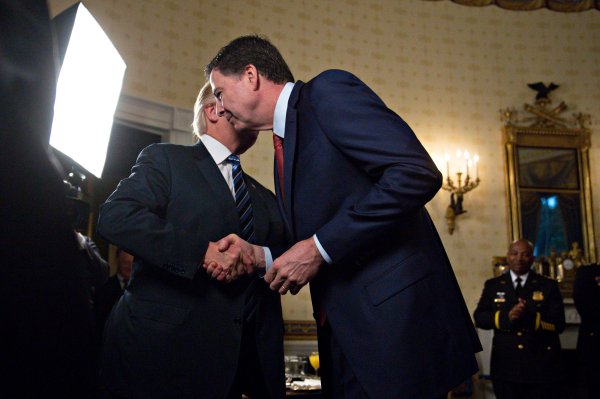