Rex Tillerson, U.S. Secretary of State, speaks during a news conference after a meeting at the State Department in Washington, D.C., U.S., on May 18, 2017.
Andrew Harrer—Bloomberg/Getty Images
By Joseph Hincks

U.S. Secretary of State Rex Tillerson on Thursday urged North Korea to “trust the U.S.” on its promise of no hostility and to refrain from conducting anymore nuclear or missile tests so as to create the right atmosphere for talks. That’s according to South Korea’s Yonhap News Agency, which cited a senior South Korean diplomat on the matter.

Yonhap quoted Hong as saying: “The most impressive thing that I heard (from Tillerson) was that sanctions and pressure are not by themselves aimed at harassing North Korea, but are designed to create an opportunity for North Korea’s development through opening its doors and scrapping its nuclear program.”

The special envoy’s mission included a trip to the White House, where U.S. President Trump said he hoped to work closely with Moon, according to Hong. The South Korean President has promised to re-engage with North Korea and expressed his openness to visiting Pyongyang under the right conditions. 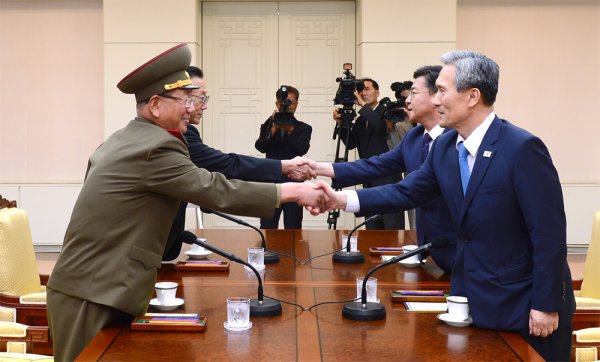 South Korea Says Communication With North Must Reopen
Next Up: Editor's Pick