The second that sports reporter Emily Jones wrapped up her live report on a baseball game Wednesday night, she found videos of George W. Bush photobombing her all over Twitter.

Jones was reporting on the Texas Rangers-Philadelphia Phillies baseball game in Arlington, Texas, when the former President slid onscreen to casually say “Hey.” She didn’t hear him, but her co-workers did, and now thousands of others online have, too.

“I’ve been photobombed before, but he was the President, so he’s kind of a big deal,” she told TIME of the moment.

Bush used to be a Rangers managing partner before becoming governor of Texas and then President for two terms, so Jones was used to chatting with him throughout the season.

After the instantly viral moment, she walked over to him and asked, “Did you just photobomb me?” His answer: “Yep, I sure did!”

“He’s obviously very playful and likes to joke around. I can’t even tell you what a nice man he is,” Jones said, adding that he often asks her about her kids.

Her thoughts on the national attention on the video? “It’s a snapshot that epitomizes where he’s at right now.” 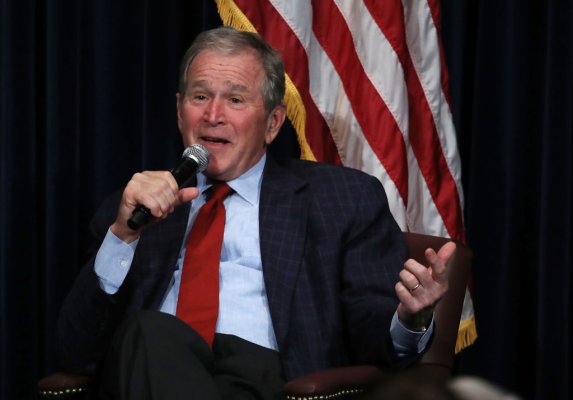 George W. Bush Photobombed a Reporter at a Baseball Game and the Internet Is Flipping Out
Next Up: Editor's Pick