“They do as little as humanly possible just to claim that they’re doing something,” Rep. Elijah Cummings, the ranking member of the House Oversight and Government Reform Committee, said in reference to Congressional Republicans.

Several Democrats called for an independent commission to investigate any ties between Trump and Russia, but there have been mentions of impeachment in the wake of the latest allegations against Trump, including a speech by Texas Rep. Al Green this morning on the House floor. Ranking member of the House Intelligence Committee Adam Schiff warned against veering away from fact-gathering at Wednesday’s press conference.

“No one, in my view, ought to rush to embrace the most extraordinary remedy,” he said after calling for Comey to come back and testify.

“I just want to get the information,” Cummings added later. “We’re going to learn some things in the process. Will it lead to impeachment? I don’t know.”

MORE: There Are 4 Possible Types of Russia Investigations. Here’s What You Need to Know

Cummings said that he was encouraged by a letter Oversight Committee Chairman Jason Chaffetz sent to Acting FBI Director Andrew McCabe requesting “all memoranda, notes, summaries, and recordings” related to communication between Trump and Comey. But the Democrat said “we need much more than that” and accused the White House of refusing to provide documents related to Flynn for months and said the time had come for a subpoena.

“It is obvious that we need to subpoena the White House to demand the documents we requested in March,” he said. Cummings also said Director Comey should appear at a public hearing before the U.S. Congress.

The Democratic press conference stood in contrast to one held by their Republican colleagues earlier on Wednesday, who focused on their legislative agenda before taking a few questions from reporters on the news of the day. House Speaker Paul Ryan urged against “rushing to judgement” before all of the facts were made available. Ryan also questioned why Comey did not come forward with such memo shortly after the alleged interaction.

“There are a lot of unanswered questions. What I told our members is now is the time to gather all of the pertinent information,” Speaker Ryan said Wednesday. Our job is to be responsible, sober, and focused only on gathering the facts. That is what Congress does when conducting oversight of the executive branch.”

On Wednesday, Schiff said it would be appropriate to ask Comey what happened in the meeting with Trump and why he didn’t report it to Congress if and when he returns to testify. 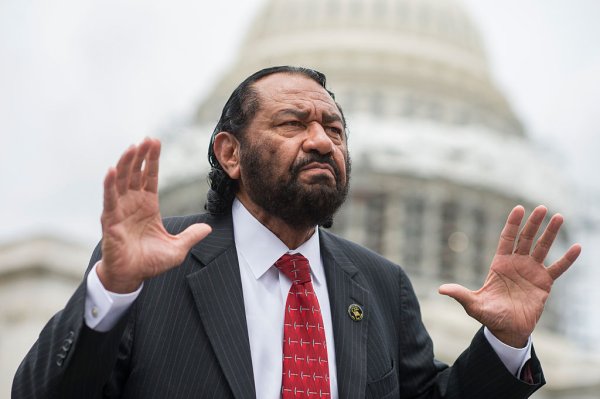 Texas Democrat Calls for Trump's Impeachment on House Floor
Next Up: Editor's Pick