Amy Schumer and Ben Hanisch have called it quits..

“Amy and Ben have ended their relationship after thoughtful consideration and remain friends,” a rep for Schumer tells PEOPLE.

The couple was together for nearly a year and a half, though the two were last photographed together in January and had been appearing less frequently on each other’s social media.

Schumer, 35, last posted a photo with Hanisch, 30, on March 12 ahead of the Golden Globes, which they attended together. The Chicago-based furniture designer did not accompany the star at the premiere of her latest film Snatched earlier this month.

In an interview with Howard Stern on May 3, Schumer had said that she and Hanisch were still dating.

When the host asked if they were discussing marriage, Schumer replied: “We are talking about today. I love the idea of committing to someone and making that choice and I want to have a family but right now, we are not in talks.”

When Stern asked how Schumer and Hanisch keep their relationship going amid their schedules, she said: “It’s good to have a lot of space.”

The comedian and Hanisch met on a dating app around November 2015. They went public with their then-budding relationship in January 2016, when Schumer called Hanisch her “man” after a visit to the White House.

“[He] is the first guy who’s really been my boyfriend,” she told Marie Claire in August.

Schumer recounted their first meeting in her book, The Girl with The Lower Back Tattoo. “We smiled at each other and in that moment, everything felt right,” she wrote.

“Things were just really easy with him,” Schumer told PEOPLE about their romance that summer. “There were no games, no waiting three days. It was clear and easy. He was so sweet. He didn’t know who I was. He’d heard my name.”

Still, Schumer said she was cautious about getting ahead of herself. “I want to be [as] hopeful in love and commitment as possible,” she told PEOPLE, adding, “[But] I come from parents who have each been married three times.”

As for her views on marriage, she said, “I can’t lie about it. I don’t have this blind optimism.”

On their year anniversary last November, both Schumer and Hanisch took to social media to celebrate. “We both weren’t looking for a relationship at the time, but something felt right from the very first night we met,” Hanisch wrote on Instagram.

“We ended up spending six days in a row together. This pic was taken in New Orleans and was the night I knew I wanted to spend my life with her,” he added.

Schumer responded with her own Instagram post, writing, “A year ago today I met the love of my life. Happy anniversary f— face. #Iwantoseeotherpeople.”

In the May issue of Glamour U.K., the comedian continued to gush about Hanisch, talking about how he keeps her safe from unwanted attention.“He’s very protective of me,” Schumer told the magazine. “Like, not overprotective, but if someone’s taking pictures of me or filming in a restaurant, he’ll start taking pictures of them.

“He’s really cool,” she continued. “It’s not a problem to be around any of the sorts of people who are at these events. He takes it all in his stride. But when I say, ‘Shall we get out of here?’ he’s like, ‘Yes!’ I’m so lucky that I met him.”

She also joked about their sex life, saying of an early-morning roll in the hay, “He yawned and it was a great excuse to stop.”

At a recent New York City screening of her new film Snatched, Schumer spoke with PEOPLE about her admiration for her costar Goldie Hawn’s 33-year relationship with Kurt Russell.

“[Goldie] and Kurt have been together forever,” Schumer said at the screening hosted by Entertainment Weekly and InStyle. “You’re like, ‘Tell me how it works.’ Of course you want to ask her as soon as you see her. 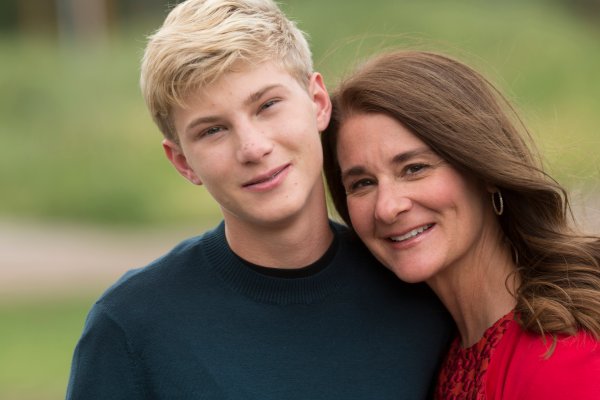 Melinda Gates: How I Raised a Feminist Son
Next Up: Editor's Pick