Melinda Gates: How I Raised a Feminist Son

When my son Rory was born, I spent a lot of time imagining what this little person would be like when he grew up. Now, as he turns 18, I have my answer.

Rory is compassionate and curious. He’s intelligent and well-read and deeply informed about the wide range of issues that interest him. He’s a great son and a great brother. He’s inherited his parents’ obsessive love of puzzles. But one of the things that makes me proudest is that Rory is a feminist.

I’m not even sure that feminist is a word I would have chosen to describe myself when I was 18. It frankly wasn’t on my radar. My parents taught me that my sister and I could do anything our brothers could, but gender equality wasn’t exactly the kind of thing we talked about around the dinner table. They were more focused on giving us the confidence to fly than discussing the barriers that might hold us back. Sure, I knew that women faced challenges that men didn’t, but I hadn’t spent much time reflecting on the less overt ways that cultural norms and gendered expectations shape our lives.

By the time I started my own family, I had a much deeper awareness of just how detrimental these gender norms can be — not just to women and girls, but to society as a whole. Bill and I had always known that, like our own parents, we would raise our children to believe they could do anything without their gender limiting their options. We also decided over time that, for the sake of our son as well as our daughters, we were going to be a family that readily talks about gender equality at the dinner table.

Of course, anyone who’s tried parenting won’t be surprised to hear that the realities in our household didn’t always live up to our ideals. I will never forget the moment a few years ago when I realized that I had been asking Rory to take the garbage out and not his sisters — a task that studies say usually goes to boys more often than girls. I was also disappointed to notice that I often held our daughters to a much higher standard than our son when it came to keeping their rooms clean. These are little things, but they’re also exactly the kinds of unconscious behaviors that, over time, contribute to societal expectations that men should do the heavy lifting, and women should handle the housework. To me, the fact that we haven’t always managed to keep these biases out of even our own household underscores how important it is to teach kids to recognize them and call them out when they see them.

Rory, for his part, does. Across 18 years of conversations, sharp observations and everyday actions, he’s demonstrated his belief that gender equality is something worth standing up for. When we talk about these issues at the dinner table, he (and his friends!) have a lot to say.

But there is one memory in particular that I hold in my heart. Two summers ago, Rory and I took a trip to East Africa — just the two of us — to see some of the work our foundation is doing in Malawi. While we were there, I met with a group of men who were working to shift gender norms in their community. They spoke with pride about how they were bucking tradition by sharing household chores with their wives, co-managing their finances and making big decisions together. They were also trying to persuade other men in their village to adopt the same approach in their own homes.

I was impressed. I thought that, in many ways, what these men were doing was extraordinary. Rory respectfully disagreed. He told me he thinks that standing up to unfair norms is nothing more than exactly what men everywhere should be doing. Yes, he recognizes that the more entrenched the norms, the more courage it takes to confront them. But he also believes that it’s a universal responsibility and one that he’s already striving to uphold in his own life.

For these reasons and more, I’m proud of my son. What’s more, I feel lucky that Rory was born at a moment in history when young men are being encouraged to be so thoughtful about society and their role in it — and also to adopt new, more expansive definitions of what it means to be a man. I’m optimistic about what the next 18 years will bring all of us as these young men grow up to become equal partners in their households, champions for women in workplace and architects of a better, more equitable future for their own sons and daughters. 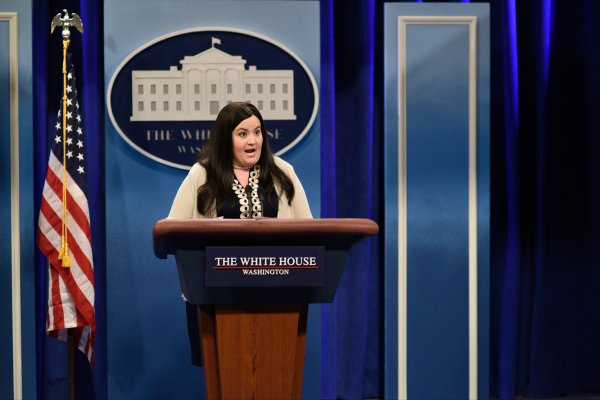 Mike Huckabee Says SNL's Impression of His Daughter Was 'Sexist'
Next Up: Editor's Pick