Sen. Tim Kaine said that “probably two-thirds” of Senate Republicans are “deeply worried” about President Trump but that they won’t say so publicly.

The Virginia Democrat, who was Hillary Clinton’s running mate in 2016, said that the recent controversy over President Trump’s alleged revelation of classified information at an Oval Office meeting with the Russians showed the concern from his colleagues across the aisle.

“I know from my dialogue with my colleagues that probably two-thirds of the Republicans in the Senate are deeply worried about President Trump,” he told TIME. “A handful have been willing to say so. Sen. (Bob) Corker last night was quick to characterize what is happening at the White House as a downward spiral that is driven largely by their own lack of discipline. And other members have been blunt too. But many more than have said so have the same concerns.”

Kaine also said that Trump’s controversies have slowed Senate work to a crawl.

“I think he has lost all credibility here on the Hill with respect to his role as commander-in-chief,” he said. “His national security credibility has been lost, and I think the combined bombshells of the last week … have hijacked every other bit of legislative agenda.”

He added that his conversation with a reporter was a sign of that slowdown.

“I would normally not be talking to you at quarter of 11 on a Tuesday because we would be in the middle of committee hearings,” he said. 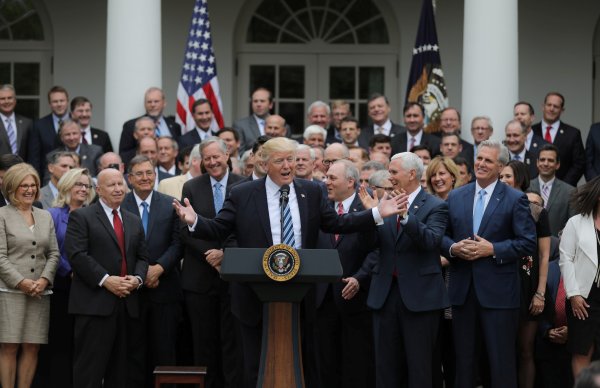