Stop Looking for Your Soul Mate and Try This Instead

“Given that you have 500,000,000 potential soul mates,” writes Randall Munroe, in the science book What If?, “you’ll only find true love in one lifetime out of ten thousand.”

A cousin of mine gave a wedding toasts along these lines at his brother’s wedding: He calculated the odds of ever finding the one person “meant for you,” given the billions of people on the planet, the number of people you’re likely to meet in the course of your life, and the fact that in the scheme of human history, none of us stays in a corporeal body for very long. The toast concluded: “So I think the odds are against your being soul mates, but that doesn’t make it less of a miracle that you found each other.”

But the soul mate ideal just won’t go away. You see it invoked in dating profiles, rom-coms, and The Bachelor.

The concept dates back at least to Plato’s Symposium. Zeus, seeking to humble humans, split us in half, forcing us to wander in search of our other half: “So ancient is the desire of one another which is implanted in us, reuniting our original nature, making one of two, and healing the state of man.”

While romantic, this has done an awful lot of damage — creating impossible-to-meet expectations, making people think that a happy, healthy relationship isn’t good enough, tricking people into holding out for “the one.”

I’ve experienced that feeling of love at first sight that signifies encountering one’s soulmate. It was magical, and then, quite quickly, dissolved by the sobering light of day, by the pressures of real life. If that man was my soul mate, soul mates are overrated.

My favorite writer on the subject of the soul mates is J.R.R. Tolkien, who was married to his wife, Edith, from her teens until her death at age 82. He acknowledged that soul mates are pretty good in theory: “In such great inevitable love, often love at first sight, we catch a vision, I suppose, of marriage as it should have been in an unfallen world.”

In a letter to his son, he presented a far more nuanced and compelling approach to what a real “soul mate” is. Was there someone out there theoretically better suited to him than Edith? Probably. But so what?

“Only a very wise man at the end of his life could make a sound judgment concerning whom, amongst the total possible chances, he ought most profitably to have married,” Tolkien wrote. “Nearly all marriages, even happy ones, are mistakes: in the sense that almost certainly (in a more perfect world, or even with a little more care in this very imperfect one) both partners might have found more suitable mates.”

Tolkien blamed our “soul mates” obsession on the Romantic chivalric tradition: “Its weakness is, of course, that it began as an artificial courtly game, a way of enjoying love for its own sake. . . . It takes, or at any rate has in the past taken, the young man’s eye off women as they are” — that is, “companions in shipwreck not guiding stars.”

I love that: companions in shipwreck. True soul mates are made, not born. This tracks with what I see in long marriages. It took time for many of even the most loving couples to feel like kindred spirits. It wasn’t something that happened in the first hour, or even in the first year. It took time, and patience, and commitment.

“He’s very efficient,” one woman I know said, looking at her husband with so much affection, I felt like I was intruding. “And I procrastinate. We used to fight about it all the time, but now we just work around each other. He lets me sit there and drink coffee in the morning while he bustles around. When we’re on vacation, we spend one day the way he wants to—usually getting up early and driving to every bakery in town — and the next day the way I want to—sleeping in, strolling. We take care of each other. But we had to learn that, how to sync up.”

Another friend told me that his tradition-minded parents, an adorable couple who would appear to the outside world like soul mates, didn’t have much binding them together when they married: “She was Jewish, and he had a good job; that was enough.” They struggled while their kids were growing up, resolving to stay together until the nest was empty and then go their separate ways. But something funny happened: by the time the children were grown, neither wanted to leave.

Our old notion of soul mates is not helpful. “The ‘real soul-mate,’” Tolkien wrote, “is the one you are actually married to.”

Calhoun is the author of Wedding Toasts I’ll Never Give. 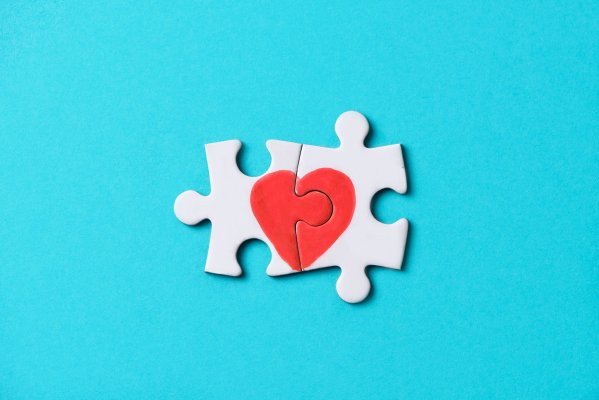 Why It's So Hard to Say 'I Love You'
Next Up: Editor's Pick