The daughter of President Trump’s longtime attorney Michael Cohen defended her father after he posted a photograph of her modeling in lingerie on Twitter. “To try to paint my family as incestual is degrading and downright disgusting,” Samantha Cohen told TIME in an e-mailed statement.

“Regardless of what my parent’s profession is, it’s incredibly inappropriate for the press to get me, a young woman involved in this political drama,” wrote Cohen. “This is an example of the media blowing things out of proportion and using an easy target, a young woman, as a vehicle to tear down other young women.”

On Sunday, Cohen, who served as an executive in the Trump Organization and appeared on cable television for the president during his campaign, posted a photograph of his daughter on Twitter with a link to her Instagram account. “So proud of my Ivy League daughter…brains and beauty channeling her Edie Sedgwick,” he wrote. The photograph was of his daughter posing in a bra and underwear.

The tweet had more than 2,500 responses by Monday afternoon, many of which criticized Cohen, often in unprintable language, and to which he responded. Various outlets covered the controversy.

Cohen derided the media for blowing the tweet out of proportion and said that she had been asked to model for a photographer after finishing a “rough semester.” Her father, she said, was simply posting them on social media because he was proud of the homage to Andy Warhol and Edie Sedgwick.

“There is nothing inappropriate in the picture and those who seek to make it something it is not are merely Trump haters who are using this as an opportunity to stir up drama,” she wrote. “There is nothing sexualized about the photograph.”

“My father does not think I’m ‘hot’ and him posting a professional photo taken of me in a bra and pants does not mean he sexualizes me,” she said. “I understand we live in such a politically charged time but I think we need to step back for a moment and think, are we fighting the opposing team just because they’re the other team?”

“I find it hypocritical that those who consider themselves liberal would criticize a woman embracing her body,” the statement read. “How would you feel if people thought your father was sexualizing you? Wouldn’t you feel hurt and embarrassed?” 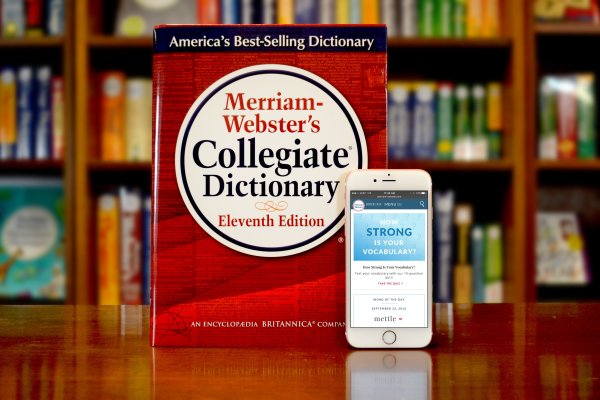 Merriam-Webster to Trump: No You Didn't Invent This 1933 Phrase
Next Up: Editor's Pick