President Trump Is Visiting Saudi Arabia to Cement a Friendship

Before he became president, Donald Trump once accused a Saudi prince of wanting to “control U.S. politicians with daddy’s money.” He claimed Saudi Arabia “blew up the World Trade Center” and also claimed that the kingdom “wouldn’t exist” without American assistance.

At the end of this week, Trump will fly to Saudi Arabia in the first overseas trip of his presidency. He will arrive having set aside the combative, Saudi-bashing stance he adopted as a political candidate, on a mission to instead reinforce America’s decades-old alliance with the Saudi monarchy.

Accordingly, the U.S. President is expected to arrive in Saudi Arabia bearing gifts — a package of weapons deals totaling more than $100 billion, which if confirmed would be one of the largest single arms sales in American history. The agreement includes ships, missile defense, and maritime security systems, according to a White House official quoted by Reuters.

The arms sale would herald the end of a brief period during which the United States signaled disapproval of the conduct of Saudi Arabia’s military adventure in neighboring Yemen. In March, the Trump administration reversed a decision made in 2016 under President Barack Obama to halt some sales of weapons linked to the killings of civilians in Saudi Arabia’s two-year old military assault on Yemen, where at least 10,000 people have died.

The revitalized friendship now stands to benefit both Trump and the Saudi monarchy. The U.S. president and key members of the royal family now appear united behind a more aggressive approach to a series of crises throughout the Middle East.

Both Trump and key Saudi officials favor intensified military action in Yemen, where a U.S. commando raid resulted in the deaths of 30 civilians and an American Navy SEAL in January in the opening days of Trump’s presidency. Trump has also become more confrontational with Iran, which has long been the Saudi’s arch-rival in a region-wide, sectarian contest for power and influence. The White House’s decision to increase the flow of weapons suggests that the two governments have laid the foundations for a tight partnership.

“I don’t think the Saudis are alarmed by the way Trump is behaving or his past remarks. I think they see this as an opportunity to roll back the clock a little bit. I think they see him as a moldable character,” says Toby Craig Jones, a historian at Rutgers closely studying Saudi Arabia.

At the center of Trump’s evolving relationship with the kingdom is a rising star within the Saudi royal family: Deputy Crown Prince Mohammed bin Salman, who met the U.S. president in March. The 31-year-old prince has emerged as one of the most prominent faces of the Saudi government. As defense minister, he oversees the war in Yemen and he is also responsible for a massive overhaul of the Saudi economy that intends to privatize part of the state oil company and increase sources of non-oil revenue.

According to Rosie Bsheer, a historian at Yale and an expert on the Saudi state, the young prince is “attempting to ingratiate himself with the Trump administration in order to gain leverage over his cousin, Crown Prince Mohammad bin Nayef, with the hopes of replacing him as Washington’s darling and contender for the Saudi throne.”

“The young de facto ruler needs to bolster his legitimacy and prove himself capable of running the kingdom’s affairs,” she tells TIME in an email. “He will therefore seek a more belligerent U.S. policy in the region with the hopes that he may at once fulfill some of his foreign policy promises and, importantly, create a hostile environment for Iran, a major thorn in Saudi Arabia’s side.”

U.S.-Saudi relations frayed towards the end of Obama’s time in office. The former president’s administration moved to limit some arms deliveries following a catastrophic airstrike on a funeral hall in Sanaa that killed about 140 people in October 2016.

With the proposed arms deal in the pipeline, the Trump now appears poised to accelerate U.S. support for the Saudi campaign in Yemen — to the horror of human rights groups. The U.N. says the war has created one of the world’s worst humanitarian crises, with more than three million displaced and millions facing starvation, while the Saudi-led military offensive has also launched numerous airstrikes on schools, hospitals, housing and other civilian targets.

“It seems to make clear that the U.S. does not care about the fact that not only is the Saudi-led coalition committing war crimes in Yemen, but they’re using U.S. weapons to do so,” says Kristine Beckerle, a researcher on Yemen with Human Rights Watch. “It’s not only alarming, it’s incredible in a terrible way,” she adds.

Trump’s visit to Saudi Arabia also comes at a precarious moment in U.S. relations with Iran. He flies to Riyadh on the same day as the Iranian presidential election, in which reformist President Hassan Rouhani faces challenges from conservative candidates who are less inclined to support negotiation and accommodation with the United States.

Trump campaigned against the Obama administration’s diplomacy with Iran, which resulted in a historic, multi-nation agreement to halt the Iranian nuclear program in exchange for a reduction in sanctions. Trump introduced new sanctions on Iran in February, and National Security Advisor Michael Flynn warned that the administration put Iran “on notice,” shortly before he resigned in connection with the expanding investigation into Trump’s ties to Russia.

This will have pleased the Saudis, who accuse Iran of supporting their opponents in the war in Yemen, Houthi rebels who seized much of the country in 2014 and 2015. Trump has articulated few specific positions on the complex politics of Iran and the Arabian peninsula, but he has shown signs that he is prepared to halt his past bombast with regard to Saudi Arabia’s role in the region and the world. 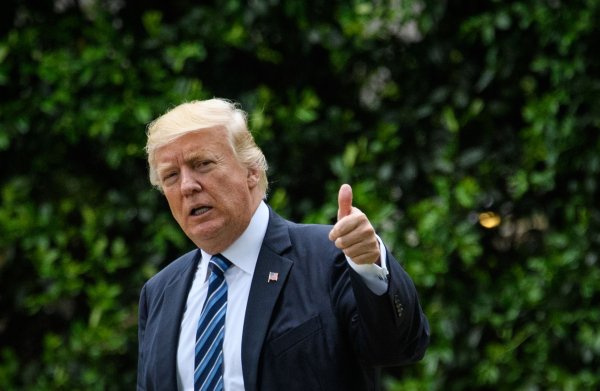