When Tanisha Bynum decided to drive to the beach with a suspended license two weeks ago, she didn’t know she was risking leaving her kids alone on Mother’s Day. And missing her son’s 3rd birthday. And skipping her daughter’s kindergarten graduation.

But as Bynum, 25, drove from Alabama into Florida to head to the beach, another car ran a red light and collided with her truck, causing her to crash into a lamppost. Bynum wasn’t hurt, but she was arrested for driving with a suspended license and taken to jail. She had already gotten another ticket in Florida and skipped her court date because she lived in Alabama, so the judge set bail at $10,000, with a trial set for early June. Bynum, two months pregnant and mother to four kids under 8, would have to sit in jail to wait it out.

“Those are milestones in my kids’ lives,” she says of the birthday and the graduation. “I didn’t want to miss them because of a traffic ticket.”

But on Friday, Bynum was one of hundreds of black women bailed out of jail for Mama’s Bail Out Day, a Mother’s Day campaign orchestrated by more than a dozen groups affiliated with Black Lives Matter. So far, social justice groups like Color of Change and Southerners on New Ground and have raised more than $550,000 to bail out black women all over the country, with $345,000 going directly to bail money and the rest spent on local organizing efforts and services for the people who have been bailed out. The Mother’s Day effort is meant to call attention to how the money bail system (in which an arrested person is kept in jail awaiting trial unless they can pay a hefty bail) disproportionately affects black families and communities. These women have only been arrested — they haven’t been convicted of a crime.

“The money bail system in this country is unjust and punishes people for being poor,” says Serena Sebring, a local organizer with Southerners on New Ground, a queer-focused social justice group. A new report from racial justice group Color of Change and the American Civil Liberties Union estimates that every day about 440,000 people are sitting in jail without being convicted of a crime, which amounts to roughly 70% of the incarcerated population. And the ACLU estimates there are eight times as many women incarcerated as there were in 1980. This is an issue that disproportionately affects black families: according to a 2017 Human Rights Watch report on how bail impacts low-income communities, black people are 6.5 times more likely to be locked up, and much less likely to be able to afford bail.

In the weeks before Mother’s Day, the groups looked at local jail rosters to see who was currently incarcerated pending trial, and wrote letters to the women inside asking if they were mothers or caregivers. They also asked clergy who work in the jail system to help them identify mothers who might want to be bailed out. “We’re working with local public defenders, folks in the court system, service providers and families,” says Scott Roberts, senior criminal justice campaigns director at Color of Change. “If there are criteria, that’s determined on the local level.”

But the groups are also concerned with making sure the recently released mothers have the services and the support they need as they await trial, whether that means temporary housing or beauty appointments. “We’re trying to go above and beyond to make sure they feel cared for and loved,” said Ashley Green, lead organizer of social justice network the Dream Defenders in Florida. “We’re taking them to get their hair done, their nails done, we’re making sure they have a clear place to stay, transportation to and from jail.”

“Anything that’s taking parents away from their kids long term is just setting up their kids for future failure,” she says.

Before her traffic incident, Tanisha worked as a nursing assistant. But because she wasn’t allowed to have her cell phone in jail, she assumes she’s probably lost her job because of her absence. Her kids have been staying with their father and grandfather, away from their rooms and toys in her house. The first thing she plans to do on Mother’s Day, she says, is go to church. Next, she plans to “wash up our clothes, cook up some dinner, and enjoy being with my kids. We might even go to Chuck E Cheese or something.”

“They have a million questions, they want to know where I’ve been,” she says. “My mother used to tell me: ‘trouble is easy to get into and hard to get out of.’ I plan to tell them the same thing.” 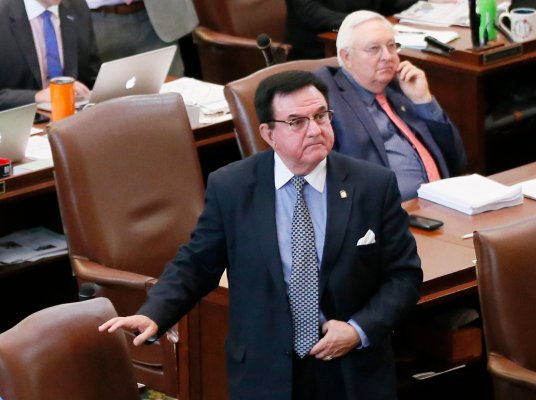 Oklahoma Republican Suggests Turning Kids Over to ICE If They Don't Speak English
Next Up: Editor's Pick