Samira Wiley: The Handmaid's Tale Embodies Everything That Feminism Means

There is no question in Samira Wiley’s mind that Margaret Atwood’s The Handmaid’s Tale is a feminist story.

To Wiley, who appears in Hulu’s adaptation as Moira, Atwood’s dystopian tale “embodies everything to me that the word feminism means.” Wiley’s view contrasts with recent statements from Elisabeth Moss, who plays lead character Offred, and from Atwood herself. Moss sparked controversy in April on a cast panel at the Tribeca Film Festival when she said the show is “not a feminist story” but a “human story because women’s rights are human rights.” Moss and Atwood shared similar sentiments in an earlier interview with TIME.

But according to Wiley, the answer is simple.

“There’s no way getting around the fact that our show is a feminist show in my eye,” Wiley tells TIME. “A feminist is someone who believes in the social and economic rights of men and women, that they’re equal. It’s not really cryptic.”

In the show, a totalitarian regime turns the United States into Gilead, where religion rules and women are stripped of their rights. Those who are fertile are forced to become “handmaids” to bear children for the society’s powerful men and their barren wives. Atwood wrote The Handmaid’s Tale in 1985 to explore the idea that established orders can change quickly. In Gilead, women are cast into rigid roles, environmental problems swell, minority communities are persecuted and Americans escape to Canada for freedom.

MORE The Differences Between The Handmaid’s Tale Show and Book, Explained

The show was filmed before the 2016 election and was released after President Donald Trump’s inauguration — and Wiley says its significance has only grown, as reality has increasingly reflected the story’s themes. Since taking office, Trump has moved to dismantle environmental protections and was criticized for not immediately addressing a spate of hate crimes. Undocumented immigrants seeking asylum have fled to Canada. Last year, states enacted over 60 new restrictions on abortion.

“Unfortunately, this show would not have had the same impact if it came out four years ago,” Wiley says, noting that Atwood’s book has always been a “warning sign” but that many people are now truly frightened by the country’s direction. “Especially for my generation of people who haven’t really lived through a time where their rights have been threatened in this way, we have never had a leader like Trump and his administration in our lifetime.”

As Moira, Wiley plays best friend to Offred (whose name signifies that she is “of-Fred,” the commander she serves). In the first five episodes currently streaming on Hulu, Moira appears only in Offred’s memories, her story told through flashback. Memories of Moira’s spunky defiance, and the sister-like role she played in Offred’s earlier life, help Offred to survive her new reality as a handmaid.

Moira is the second major gay character Wiley has played. The actor is best known for her previous role as Poussey Washington on Orange Is the New Black, a lesbian character who becomes the grim victim of a state corrections system.

Out of fear of being typecast, Wiley didn’t intend to only play gay characters, but she felt she could not say no to the role of Moira. As her wife told her when she was weighing the role: “This one you go gay for.” Wiley says playing a lesbian on this show during such a politically charged time is personally significant because of the continued threats facing the LGBT community.

“We see amazing progress, but then a year or so later, we’re scared as a community,” she says. “I really hope that our show is a warning sign rather than prophetic.” 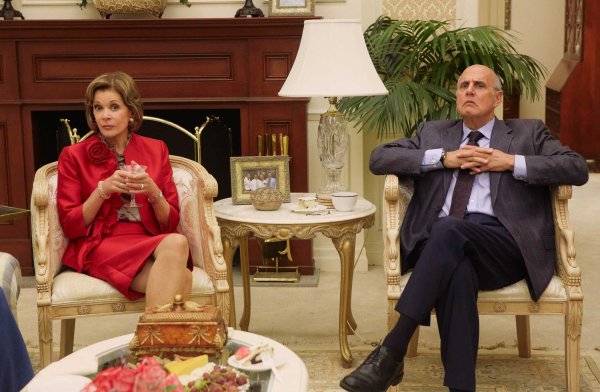 Arrested Development Is Officially Returning to Netflix
Next Up: Editor's Pick