The White House has said President Donald Trump dismissed FBI director James Comey over his handling of the investigation into Hillary Clinton’s use of a private email server. But Stephen Colbert doesn’t buy it.

“The question is: Why did Trump do it?” Colbert asked on Wednesday night’s Late Show. “Now, while it looks like Donald Trump fired James Comey to stop the Russian investigation — that is why.”

Colbert said he is “pretty confident” in his reasoning.

“Because one thing we’ve learned from the last two years of Donald Trump is what it seems like he’s doing is exactly what he’s doing,” Colbert continued. “There’s no grand strategy; he’s not some puppet master; he’s not some wizard playing three-dimensional chess. He’s playing Hungry-Hungry Hippos.”

Before he was fired, Comey was investigating whether the Trump campaign had colluded with Russian officials to influence the 2016 U.S. presidential election.

“There’s nothing deeper going on. He’s a baby pool. You could not get your ankles wet in Donald Trump.”

Citing a New York Times report that said Trump had allegedly told Justice Department officials to find reasons to fire Comey, Colbert created a new nickname for the department: the “Department of Justification.”

Colbert also pointed to a Wednesday tweet from the president.

“Comey lost the confidence of almost everyone in Washington, Republican and Democrat alike. When things calm down, they will be thanking me,” Trump tweeted.

“All right, how should we thank him?” Colbert asked his audience. “We should get him something special. How about a special prosecutor?” 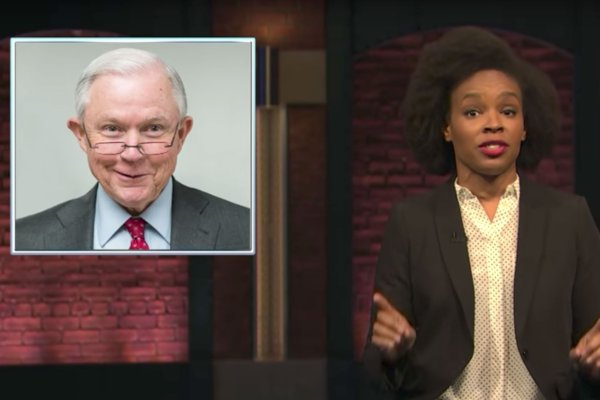 Late Night Explains How Not to Laugh at Attorney General Jeff Sessions to 'Keep You Out of Jail'
Next Up: Editor's Pick