The Shoddy Science Behind Fidget Spinners

Jenn Jarmula, an elementary- and middle-school teacher in Chicago, recently hung a sign outside her classroom. This Is A Fidget Spinner Free Zone, it read. Fidget spinners — which dominate Amazon’s top-selling toys and games list — are nothing more than gadgets with three weighted prongs that spin, spin, spin on the fingers of sixth-graders like tiny ceiling fans. They’ve existed in some form since 1993, but lately they’ve grown so popular that retailers can barely keep them in stock. In order to keep up with demand, Toys “R” Us has chartered jets to ship spinners to its stores.

Jarmula says they’ve become disruptive in the classroom. She recently confiscated four spinners from a single student in one class period, stuffing them into the pockets of her pants, which she now favors wearing over skirts for their ample fidget-spinner storage space. She’s just one of many teachers who are opting to ban spinners from classrooms, even as some manufacturers are touting their therapeutic benefits for students with autism, anxiety and attention-deficit/hyperactivity disorder (ADHD).

The alleged mental benefits of the toys have helped fuel their sales, but even a cursory look at the nonexistent science — and the history — of the spinners makes it clear that these claims are specious at best. Fidget spinners weren’t created by behavioral scientists with a deep knowledge of intellectual disability nor were they created by experts in a lab; they were first patented by an inventor from Florida named Catherine Hettinger who wanted to promote world peace. She began imagining the spinner while visiting her sister in Israel. What if the young boys throwing rocks at police officers played with something calming instead? she thought. Hettinger’s spinner never took off: Hasbro passed on it, her patent expired in 2005, and the spinner toiled in obscurity until earlier this year, when a series of YouTube videos featuring teenagers doing tricks with them went viral.

Soon, anecdotal reports emerged of special-needs kids benefiting from them. Cat Bowen, a lifestyle writer at Romper.com, a website for millennial mothers, says that since her 9-year-old son, who’s on the autism spectrum, started using a spinner, he’s been more focused. Math homework that used to take him an hour to get through now takes just 40 minutes, she says.

But anecdotal evidence from an individual child isn’t the same as the scientific evidence required to support marketing claims like “Perfect for ADD, ADHD, Anxiety and Autism,” as one fidget-spinner ad does. At least 10 other companies listed on Amazon market the product as a medical intervention.

Some scientific studies have found that fidgeting can, indeed, benefit young students with ADHD. Researchers suspect that movement helps kids maintain alertness during cognitive tasks. In her work, Julie Schweitzer, director of the attention, impulsivity and regulation laboratory at the University of California, Davis, has found that children with ADHD scored higher on an attention test while squirming in their seats and moving their legs, compared with when they sat still. Another study, published in the Journal of Abnormal Child Psychology, found that the more kids with ADHD fidgeted, the better their working memory. Such movement probably stimulates underactive regions of the brain, like the dorsolateral prefrontal cortex, which plays a role in attention, planning and impulse control.

Many children with autism also have elevated symptoms of ADHD, so it stands to reason that fidgeting could aid them too — in theory, anyway. But experts say that playing with a fidget spinner, which does not require much physical activity, might not garner the same results as actual fidgeting. With fidget spinners, kids essentially outsource the action. “The spinner does the movement for them,” says Mark Rapport, head of the Children’s Learning Clinic at the University of Central Florida. “I imagine it would distract the heck out of kids.”

Experts say that promising relief for a child through a $5 spinning ball bearing can have pernicious effects. “Many parents are desperate,” says Rapport. “They’re looking for magic. These claims raise their hopes, only for them to get dashed.” 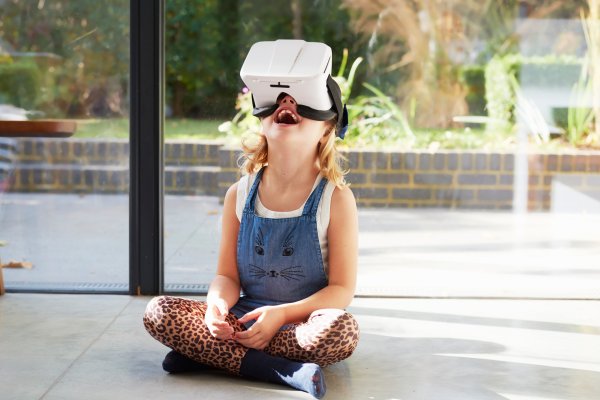 How Virtual Reality Can Help Children
Next Up: Editor's Pick