Three-time Olympic bobsledding star Steven Holcomb, at 37. In 2010, Holcomb drove his four-man team to a win at the Winter Olympics, ending the U.S.’s 62-year gold-medal drought for that event.

The retirement of Britain’s Prince Philip from public duties this fall, after seven decades of official meetings and visits. Buckingham Palace said the 95-year-old had the full support of his wife, Queen Elizabeth II, who will continue to carry out her royal engagements as usual.

Kate Spade, quirky handbag and accessories brand popular with millennials, by affordable-luxury retailer Coach, in a $2.4 billion deal after months of speculation on Wall Street.

Pepe the Frog, by his creator, in a bid to stop alt-right groups from using the cartoon as a racist and anti-Semitic meme. Artist Matt Furie published a comic strip featuring the character, branded a hate symbol by the Anti-Defamation League, being given an open-casket funeral. 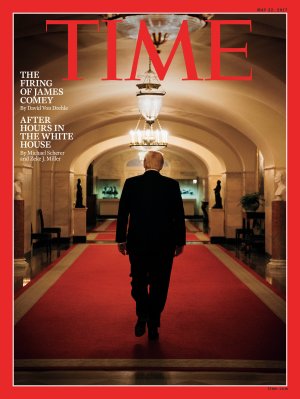 The Story Behind TIME's White House Cover Shoot With Trump
Next Up: Editor's Pick