Why We Need a National Women’s History Museum

She seemed to appear out of nowhere, a “Fearless Girl“ standing in a power pose that would make Wonder Woman proud, staring down that famous Wall Street “Charging Bull.” And there is something about her that captured the world’s attention and made everyone take notice — enough that she will stay standing through February 2018. Maybe it’s that she’s a girl, representing the future we want for our daughters, fearlessly facing their challenges, fighting for what they believe in. But it’s clear that a girl, even as a statue, can make a difference.

However, making a difference can be daunting, especially in the absence of role models to show you the way. A recent study found that stereotypes can lead girls as young as six and seven to believe that women are not as smart as men, making them less likely to choose ambitious activities and careers.

History textbooks taught in schools have long disregarded the contributions of women, often relegating notable ones to the sidebars. Of the 100 statues in the U.S. Capitol’s Statuary Hall, only 9 are women. Only 3 percent of the members of Congress who have served since 1789 are women, and only 27 Fortune 500 companies have women at the helm today.

This brings us to one conclusion: Our collective national story is incomplete. The history we learned as children and that children are being taught in classrooms today doesn’t tell the full story. When we don’t include women’s contributions to history, we’re teaching a story riddled with holes.

Myra Sadker, a pioneer in researching the impact of gender in the classroom, summed it up perfectly when she wrote, “Each time a girl opens a book and reads a womanless history, she learns she is worth less.”

When girls learn about accomplished women in history, they become more aware of the possibilities in their own lives. For boys, it’s important to see and learn about accomplished women so they know how important both men and women have been in shaping our nation and that their female classmates — and future colleagues — have value and opinions worth hearing. Teaching young boys and girls about women’s history, showing them examples of high-achieving women and encouraging them to pursue their dreams — regardless of gender — is imperative to our nation’s future.

That “Fearless Girl” statue is just one example of how to inspire the next generation. But for every viral story, there are dozens of untold and equally motivating stories of past and present women leaders that encourage a young person to pursue a new path.

The online National Women’s History Museum was founded in 1996. For more than 20 years, a group of women and men from all walks of life have been working with Congress to create an official building on the National Mall. And we’re finally nearing our time.

In November, shortly after the presidential election, a privately funded, bi-partisan Congressional Commission charged with studying the need for a national museum presented its recommendations to Congress. Their central endorsement was that “America needs and deserves” a women’s history museum in a prominent location, on or very near to the National Mall.

While there are days when it seems we are very divided, a women’s museum is something that could bring us all together — Democrats and Republicans, men and women — to celebrate women’s contributions to our nation’s history. In March, Democratic Rep. Carolyn Maloney of New York and Republican Rep. Ed Royce of California introduced a bill that would establish a national women’s history museum. We urge Congress to pass this legislation. The private sector, while dedicating resources to diversifying and including more women in the workforce, should support building the museum so more girls and women can learn about those who came before them and imagine their own futures.

We are the greatest nation in the world, with a story no other country can tell, but that story has missing pages. America’s history remains unfinished. It’s time to complete it.

Susan Whiting is Chair of the Board for the National Women’s History Museum and former Vice Chair of Nielsen Media Research. She is a cousin of Susan B. Anthony and is passionate about education and history. 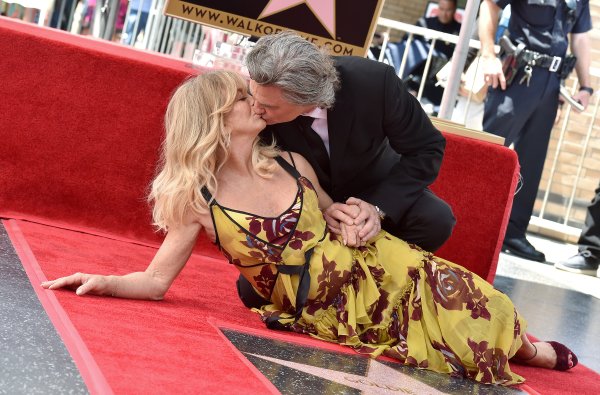 How Goldie Hawn and Kurt Russell Have Stayed Together for 34 Years
Next Up: Editor's Pick